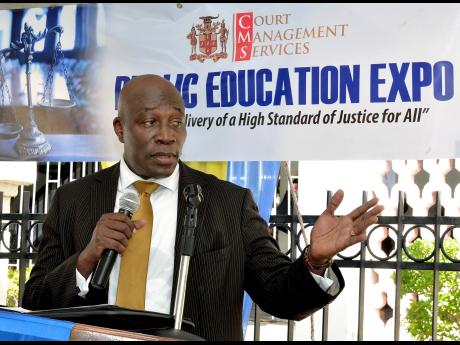 Chief Justice Bryan Sykes yesterday questioned whether it would be better for the Government to issue Jamaicans with free passports rather than insist on the National Identification System (NIDS), which runs the risk of violating persons' constitutional right to privacy.

The suggestion followed a concession by Attorney General Marlene Malahoo-Forte that the National Identification and Registration Act (NIRA) in some ways infringed on citizens' right to privacy, especially as it relates to the collection of core biodata, including fingerprints and blood type.

Sykes is one of three judges overseeing the case brought by the People's National Party (PNP) against the Government, which is contending that the NIDS is unconstitutional.

During the hearing, which continued in the Supreme Court yesterday, Sykes questioned whether the collection of such intrusive data was necessary, considering that some biodata, including fingerprints and photographs, that is unique to individuals is already captured for passport purposes.

Sykes explained that in a free and democratic society, preservation of individuals' freedom must be paramount and that the State must ensure that infringements are minimal.

Jamaicans should also have the choice to decline to be part of the system, he said, otherwise the Government runs the risk of instituting a totalitarian regime with the NIRA stipulations.

WILL THE HOMELESS BE PROSECUTED?

"What you are saying is that we (Government), the great and the good, know better than you (people). We are wiser than you ... and that is contrary to a free and democratic society," said the chief justice one of the many times he, embarrassingly, thrashed arguments being made by Malahoo-Forte.

"If you should tell one of the homeless persons on the street that he must register and must provide a fingerprint, and he says, 'I don't want a passport, I don't use a credit card, I go to Father Ho Lung, and all the do-gooders pass by and give me some food', you are saying that the State must now pick up that individual, take him to Central Police Station, put him before the court, and prosecute him because he didn't apply for his number," said Sykes to snickers from the courtroom.

"Even when persons make those choices, the Government is still responsible for them," responded Malahoo-Forte, who continued to struggle for answers in yesterday's proceedings.

The NIDS legislation was passed by Parliament in the face of a walkout by the Opposition when the Government failed to refer the bill to a joint select committee for further deliberations.

The court action is being brought by PNP General Secretary Julian Robinson on behalf of himself, his constituents in St Andrew South East, and the members of the PNP. The Opposition is arguing that the act breaches the rights to equality, public liberty, and the security of the person, among other things.

The hearing concluded with the judges promising to return a verdict within six months.