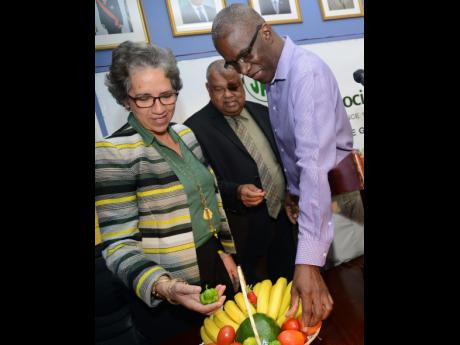 President of the Jamaica Agricultural Society (JAS) Lenworth Fulton has charged the Government and the private sector to provide greater support to local farmers by utilising more Jamaican produce. This is necessary, he said, to reduce the heavy dependence on "careless" imports, which has pushed the country's food import bill for January to July 2018 to US$501.6 million, a 5.4 per cent increase over the corresponding period for 2017.

The JAS president used yesterday's launch of 'Eat Jamaican Month' to draw attention to "the growing 40-ft container farms that seem (to be) the order of the day" that benefit from a licensing regime that creates hardships for thousands of local farmers. "This also threatens the investment in poultry, pigs, dairy, Irish potatoes, and onions," he added.

"This is where Government must protect agriculture by saying no import licensing and pumping more money into local agriculture," Fulton told farmers and stakeholders in the agriculture sector at the JAS's head office, 67 Church Street, downtown Kingston.

Farmers at a disadvantage

Permanent Secretary in the Ministry of Industry, Commerce, Agriculture and Fisheries, Andrene Collings, who delivered the keynote address, cited data from the Statistical Institute of Jamaica to show that Jamaican farmers continued to be at a disadvantage.

She told the launch: "In relation to CARICOM, revenue from total food exports for January to July 2018 decreased by five per cent to US$19.2 million. Food imports from CARICOM, on the other hand, were valued at US$78.1 million, an increase of 1.9 per cent over the similar period, last year.

"These statistics are clearly an indication that we have a challenge, which we must use as an opportunity to grow Jamaican agriculture. Can you imagine what the situation would be if we 'Eat More Jamaican', import less, and export more Jamaican products?"

Fulton also served notice that the JAS would be stepping up its advocacy on a number of critical issues adversely affecting agriculture, including the establishment of the Jamaica Agricultural Commodities Regulatory Authority (JACRA), an umbrella organisation designed to replace a number of commodity boards.

"We think the (JACRA) Act should be repealed, not even amended, since it is punitive to our farmers and a disincentive to production.

"We'll have a major fight with Government, I know, in terms of the lands owned by the Coffee Board, Cocoa Board, and all the other cooperatives because they cannot be sold and the money goes (to any other source) other than into the hands of poor farmers," he warned.

However, Collings gave the assurance that the ministry understood the need for a united approach in order to achieve sustainable development.

"Mr President, there is nothing that you said in your opening remarks that we would have an issue with. It just points to the fact that there is really a lot of work that, together, we can accomplish to address the several thorny issues that face the sector. It is only through collaboration and cooperation that we are going to meet, discuss the perspectives, and come up with what is good for the growth and development of Jamaica," she reasoned.