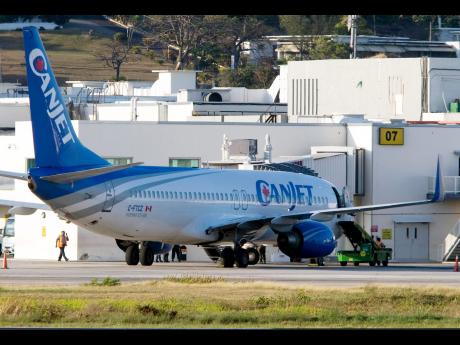 Adrian Wyld
The Canjet airline which Stephen Fray attempted to hijack at the Sangster International Airport in Montego Bay in 2009.

Stephen Fray, the Jamaican man who was sentenced to more than 70 years in prison for hijacking a commercial airline at the Sangster International Airport in Montego Bay, St James, nearly a decade ago, is back with his family.

"He is safe and in good hands," his sister, Dominic Fray, told The Gleaner on Monday.

"I am very passionate about mental health," she added.

Dominic Fray declined any further comment, saying that "it would not be in Stephen or the family's best interest" to discuss the support systems that have been put in place for her brother.

The Department of Correctional Services confirmed on Monday that Stephen Fray was released on parole from the Tower Street Adult Correctional Centre, formerly known as General Penitentiary, four days before Christmas, last year.

Jamaica was thrust into the international spotlight on April 19, 2009, when Fray, armed with a gun, forced his way on to an aircraft operated by CanJet Airlines after it arrived at the Sangster International Airport shortly after 10 p.m.

During the ensuing drama, which lasted several hours, Fray robbed several passengers and crew members and shot at the pilot before he was disarmed and apprehended by flight attendants and security personnel.

He was subsequently indicted in the Western Regional Gun Court for illegal possession of firearm and ammunition, shooting with intent, robbery with aggravation, and assault.

At the end of his trial later that year, Fray was found guilty of all the charges, except two counts of assault, and sentenced to a total of 84 years in prison.

But in 2011, Fray, through his attorneys, challenged the conviction and sentence before the Court of Appeal.

The Appeal Court confirmed the conviction but shaved 13 years off the total sentence.