We are eating our own garbage, says JET's Stanley 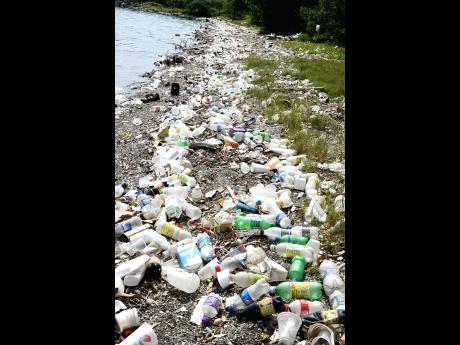 File
The shoreline along the Michael Manley Boulevard in Kingston is littered with plastic bottles washed down from gullies in the Corporate Area.

Despite over 1,700 volunteers participating in the International Coastal Clean-up Day, removing an estimated 15,488 pounds of garbage from the Kingston Harbour, solid waste management in Jamaica is in a state of crisis according to Suzanne Stanley, chief executive officer of the Jamaica Environment Trust (JET).

Stanley was responding to questions posed by The Gleaner last week regarding the state of sections of the Kingston Harbour coastline in the wake of recent heavy rains, where many of the areas targeted in the last clean-up efforts in September were observed to be overrun by debris.

Stanley affirmed JET's support for the Government's ban on single-use plastic bags, straws, and polystyrene food and beverage containers as a move in the right direction; however, she noted that more needed to be done, adding that it remained unclear how the Government intended to address the problem of plastic bottles, which is a significant source of non-biodegradable waste, locally.

"A ban is just one part of a complex puzzle. There are regulations and legislation that need improvement, and there is inadequate enforcement of the existing anti-litter, anti-dumping laws. Our garbage collection is not as frequent as it should be in many communities, and there are not enough bins in public spaces," she explained.

According to Stanley, it is the totality of these issues that creates the unsightly build-up along the island's shorelines. She further underscored the importance of public education as a tool to combat the scourge of improper waste disposal.