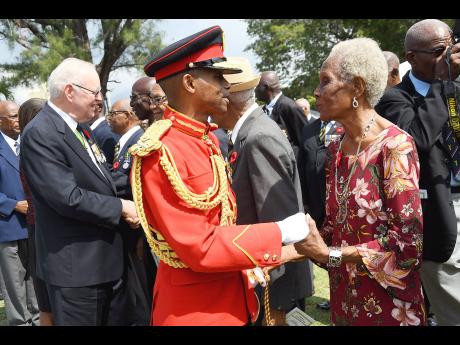 Yesterday marked exactly 100 years since the 'Great War', World War I, was brought to an end and tribute was paid to those Jamaican men who died in that catastrophic event during a Remembrance Day ceremony held at National Heroes Park in Kingston.

Current members of the Jamaica Defence Force (JDF) and army veterans (most of whom fought in World War II) along with their spouses, as well as local and foreign diplomats, converged at Heroes Circle to honour the brave men who fought not only for their sovereign nation, England, but shed their blood for the advancement of the entire world.

Major Basil Jarrett, civil military and media affairs officer in the JDF, told The Gleaner yesterday that remembering those who fought in the war is important.

“Because a lot of the rights and freedoms that we enjoy today are because of the sacrifices of these brave military men. Even 100 years later, we still owe them a debt of gratitude,” Jarrett said.

Denys Wibaux, the French ambassador to Jamaica, said his grandfather was injured during the First World War.

Wibaux appealed to Jamaicans to not look at the role played by their soldiers 100 years ago as unimportant.

He said a meeting with roughly 60 heads of government including French President Emmanuel Macron took place in Paris, France, and served as a national homage to those who suffered.

“For me, as a French man, this day is emotional to see that you here in Jamaica also suffered," the ambassador said.

"France suffered a lot in the First World War. It was sort of a collective suicide for Europe. My grandfather was injured in 1917. Friends of his died and, if my grandfather hadn't survived, I would not be here. The same exists for Jamaica because persons lost relatives too. Certainly the injured people must be remembered too.”

He continued: “This was a sort of industrialised war. For the first time, the belligerents made use of modern arms. Machine guns had never been used in wars prior to the First World War. In the First World War, we saw for the first time the use of armoured tanks. Never in the history of the world have there been so many dead and injured people in a war. It is important today that we celebrate the armistice. In a sense you think it has nothing to do with you. Your ancestors in Jamaica fought under the British Empire. My wife’s parents came from Africa and her father was a combatant in the Second World War. These wars are a sort of fight for liberty.”