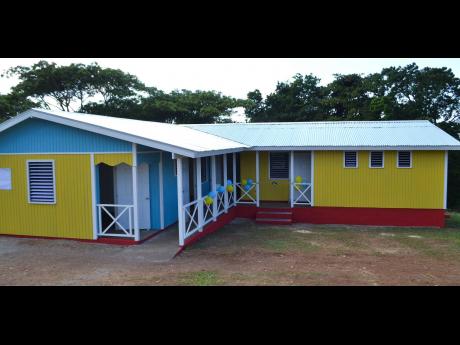 The newly constructed Infant Department will serve more than 40 pre-schoolers at the Waltham Abbey Primary in St. Ann

Food For The Poor Jamaica celebrated the official opening of the new Infant Department at Waltham Abbey Primary School in St Ann recently. The building, in shades of pale blue and yellow, will accommodate more than 40 preschool children.

The school is the result of the partnership between Food For The Poor and the Crispinelli family, whose daughter, Stephanie, was killed in the 2010 Haiti earthquake. To honour their daughter's memory, her love for children and special affection for Jamaica, the eighth 'Steph's Place' officially opened at Waltham Abbey Primary School.

Students and teachers from the school joined Food For The Poor representatives, government officials, the Crispinellis and their friends for the ceremony.

Carlene Chambers, education officer at the Ministry of Education, expressed her deep gratitude for the collaboration that led to the construction.

"The Ministry of Education could not have covered this substantial need that the country has in terms of educational development on its own," Chambers said.

"Today marks another milestone in the history of this school," said Food For The Poor-Jamaica director of construction services, Mike Matalon. "Too often, accomplishments of this nature go unnoticed. Today, we celebrate the awesome generosity of the Crispinelli family and their team for understanding the needs of our island. This will make a difference for future generations."

Nick Crispinelli, Stephanie's brother, expressed his appreciation for the work the school is doing.

"When we first came to the school, I saw the sign that reads 'Every child can learn, every child must learn.' It's pretty clear that the school faculty is doing a great job with the children, so we thank you," Crispinelli said. "You are the real heroes, helping these children to be the future stars of the community."

Member of Parliament Dr Dayton Campbell noted, "If we are going to make a serious investment in the future, we have to invest in education. One of the most critical areas is early childhood education, because if you start out the children with the right habits, they are likely to do much better at a later stage in life."

Food For The Poor-Jamaica has built more than 100 schools, and continues to contribute to the future of Jamaica through its ongoing commitment to education.