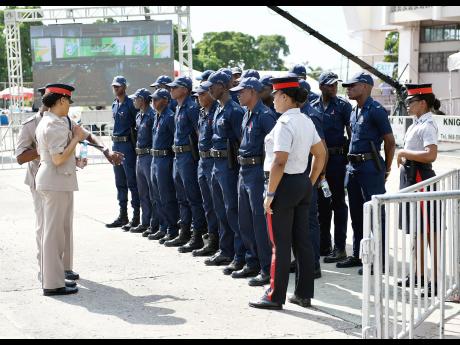 Ricardo Makyn
Members of the Jamaica Constabulary Force being briefed by senior officers prior to the start of the JLP's 75th annual conference at the National Arena yesterday.

Holness, speaking yesterday at the 75th annual conference of the Jamaica Labour Party (JLP), said the drawn-out discussion was not benefiting anyone.

"You all know that crime is down. We have worked very hard. And at this juncture, I want to thank the police. I want to focus on the police. Much maligned; a lot of bad things have been said about them. But they are good men and women in uniform," the prime minister said, acknowledging the thousands inside the National Arena.

"I have been watching the negotiations with the police and I am very concerned. I want these men and women to know that I am sympathetic. That we have your interest at heart. We are doing the best we can. And I am asking the minister of finance to increase his efforts to bring this matter to a close," the prime minister told the conference crowd.

However, increased attention is unlikely to mean an increased wage offer, as the prime minister said that the Government had to be sensible about fiscal discipline.

"We want our policemen and women to be happy in service," stated the prime minister, adding that the Government was very careful with its economic programme.

He said with the new thrust of fiscal discipline, all stakeholders should bear that in mind when they approached the negotiation table.

Leading the police's claim is the chairman of the federation, Corporal Arlene McBean.

The federation has rejected several offers made by the finance ministry.

To date, 80 per cent of public-sector workers have already signed a four-year wage deal with the Government.