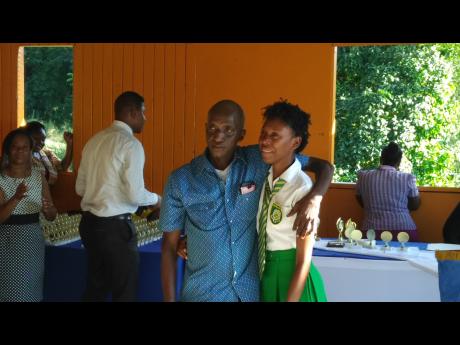 It was the merit awards ceremony for 176 outstanding students of the St Mary Technical High School last Wednesday, but a 45-year-old step-parent got the loudest applause and the only standing ovation.

Top achiever Trevesha Watson, 17, overcome with emotions, had interrupted the agenda to recognise Howard Heslop on his birthday and to hail him as a "real man".

"How many can say after their mother and step-father have been separated, he still took that child as a priority?" she wrote in her tribute read by a teacher, Betsy Beckford Dawson, as she was too overwhelmed to speak.

"How many can say they have never been abused by their step-parent - whether sexually, emotionally or physically?"

As applause pierced the atmosphere, Heslop emerged from the crowd to roars and Watson cried some more.

Watson, who has nine CSEC passes, had earlier collected seven awards as the top-performing grade 11 student in various subjects for the 2017-18 academic year.

Now a student at St Mary High School pursuing studies in sixth form, Watson wants to become a nutritionist but is also eyeing a career as a public-health inspector.

She said she was not yet ready to tell her full story but recalled that in 2011 when her mother lost her job as a teacher of remedial maths and English at St Mary Technical's evening institute, it was her stepfather who became the sole breadwinner.

There were five other children, her mother and Heslop's father in their Orange River household in Richmond, St Mary.

"I have never seen or heard of any other man such as him," said Watson's mother, Marranda Brown, 41. Brown, now a janitor at the St Mary Technical High School, said she was elated by her daughter's gesture.

She said it was most deserving, as Heslop has been more than a gentleman.

"Even though we have separated, every Sunday, I get my dinner," she said. Brown said, too, that she makes no decision about her daughter without Heslop's consent, as her biological father does not play his role.

Stepdad makes education a priority for his children

Days after Howard Heslop was surprised by his stepdaughter who heaped praises on him publicly during the merit awards ceremony for 176 outstanding students of St Mary Technical High School, the grateful dad was at a loss for words.

"I can't explain it," he said yesterday, struggling to describe his emotions. A former deputy head boy at St Mary Technical, Heslop has been a driver at the IGL Annotto Bay branch for the past 21 years.

He said because of his very hectic job from Mondays to Saturdays, he is unable to spend quality time with his children and stepchildren, but he makes it a routine every Sunday to cook for them.

He told The Gleaner he has always sought to make education a priority for his children, as it will be the only way out of poverty.

In fact, Heslop recalled the disappointment for Watson in 2013 when she passed her Grade Six Achievement Test with a 90s average for The Queen's School in Kingston, but had to be transferred to St Mary Technical High because he could not afford to send her to another parish.

He said it has always been his conviction that he should not have to beat his children but instead insists that they should "pressure" their books.