Economic growth could be derailed if key issues not addressed - Seaga 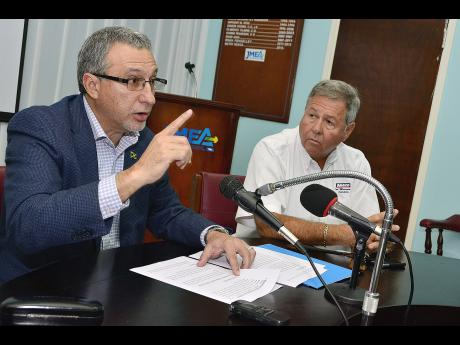 Jamaica's impressive economic growth trajectory could be derailed if a number of outstanding issues are not addressed urgently, president of the Jamaica Manufacturers and Exporters Association (JMEA), Metry Seaga, has warned.

"We have been through a year where confidence has been restored, the nation is on a path of economic recovery, and employment has been on the rise," Seaga said in his opening remarks, before turning to the downside of the equation during yesterday's press conference at the JMEA head office in downtown Kingston.

"As an industry, we continue to battle to have export and manufacturing given the level of focus that is required to move this nation from its menial state of growth. Our continued focus on services alone will not create wealth for our people."

In fact, he insisted, some gains were being eroded directly by misguided policies such as the one governing the divestment of State-owned properties in the hands of the private sector. The JMEA president cited the following example in making his case.

"A number of the facilities being divested through FCJ (Factories Corporation of Jamaica) are locations that currently house manufacturing and export entities, which have invested in bringing the properties up to a standard that complies with regulations. We don't understand how the properties for divestment would have been determined. This is a strategy that will result in the displacement of several factories. This needs to be re-examined, as the lack of adequate factory space for exporters and manufacturers is one of the top three issues being raised by our MSMEs (micro, small and medium-sized enterprises)," Seaga stated.

Total export of goods for 2017 was an impressive US$1.3 billion, a 12.46 per cent improvement over the previous year and the highest in 10 years, but the sector still underperformed, Seaga believes.

"We know we can make strategies work when we have the commitment and the political will to do so, such as the BPO (business process outsourcing) Strategy. The same can be said about the Manufacturing Growth Strategy that the JMEA has been pushing to finalise since January 2018, which remains unfinished as at today. How can sectors that influence growth of up to 63 per cent continue to be left unattended?"