Rotary Club of Kingston to spend $15m on major projects 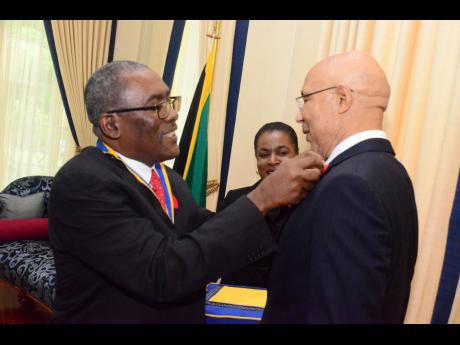 Governor General, Sir Patrick Allen (right), honorary member of the Rotary Club of Kingston, is presented with the 2018-2019 Rotary pin bearing the theme 'Be the Inspiration' by club president, Linval Freeman during a recent courtesy call on the Governor General at Kings House.

The Rotary Club of Kingston is to spend about $15 million on three major projects that are to be completed in the administrative year ending June 2019.

President of the club, Linval Freeman, said the projects will include the Homes for the Homeless project, which will seek to deliver five new two-bedroom homes to needy families, in partnership with Food For The Poor.

On November 30, the Rotary Club of Kingston will complete a newly constructed covered walkway and computer lab at the Garden Hill Primary School, St Catherine, both estimated to cost $5 million.

Also, in early 2019, the service club plans to present incubators, monitors and other medical equipment, estimated at $10 million, to the Bustamante Hospital for Children, in a joint effort with the Rotary Club of Camrose, Canada.

Details of the club's activities over the administrative year were outlined by Freeman, during a recent courtesy call on Governor General Sir Patrick Allen, who is an honorary member of the Rotary Club of Kingston.

Another highlight of the administrative year is the annual Christmas treat for senior citizens, which is set to take place on Saturday, December 8 at the Wolmer's Boys' Auditorium, where 750 elderly will be treated, in keeping with the club's continuous community services programme. This has remained one of the club's annual projects for the past 30 years.

Freeman also advised that the Rotary Club of Kingston was on a drive to grow its membership by 15 per cent by the end of the current administrative year, ending June 2019.

"So far, we have inducted nine new members, with an additional six now undergoing orientation," he noted.

During the courtesy call on the governor general, Freeman pinned Sir Patrick with a Rotary pin that carries the current year's theme 'Be The Inspiration'.