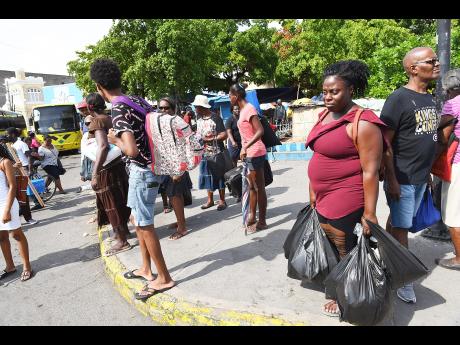 Ricardo Makyn
Yesterday, persons were left stranded at North Parade in downtown Kingston, after taxi operators protested for a second day, blocking sections of the island, upset about provisions in the new Road Traffic Act.

Despite the chaos caused by taxi operators who protested yesterday for the second day across sections of the island over what they called "ridiculous" aspects of the newly proposed Road Traffic Act, a government source said that not much will change.

Some taxi operators and owners went to Gordon House and heaped stones and large debris on the roadways metres away, as lawmakers met. Some forced colleagues who attempted to work, to empty their vehicles of passengers.

President of Jatoo, Louis Barton, who described the new legislation as using an "Uzi to kill a fly", eventually convinced some operators to clear the streets, before marching on Gordon House to deliver a letter of concern to Speaker of the House, Pearnel Charles Sr.

The taxi owners are demanding not to be ticketed for the wrongs of the drivers, among other concerns, like exorbitant increases in certain fines.

They were told that they will hear further from government. However, Charles told the Jatoo president that he himself was scared of the behaviour of some taxi operators and outlined that he will be delivering the letter to Transport Minister Robert Montague.

FEARFUL FOR MY LIFE

"I am fearful for my life because of some of these people. They just run you off the road. I make an appeal to passengers to stop telling the drivers to drive faster. I can only submit this to the minister. This is a ticklish point, because when you have a man with 21 tickets driving your vehicle, then leaves the taxi job, then we have a problem. We have to settle the issue with these irresponsible drivers who are using your vehicles to create mayhem," said the speaker of the House.

Montague told The Gleaner yesterday that the new Road Traffic Act will affect all motor vehicle operators and owners.

"Because of our privacy laws, the electronic devices are turned towards licence plates and not drivers. You will know that it was this vehicle and who the owner is," said the minister.

"We have had cases of death because parents hand over their cars to 13- and 14-year-old children. Who then is responsible? I commend the operators for peacefully demonstrating. Whether you agree with them or not, you have to respect them."

Opposition Spokesperson on Transport, Mikhael Phillips said that Montague should have given a response to the public passenger vehicles sector before operators and owners had to resort to blocking the roads. He advised players in the sector to ensure they know who they are putting in charge of their vehicles.

Yesterday, the police arrested two taxi drivers, who both have more than 700 traffic tickets outstanding. They will appear before the courts today.