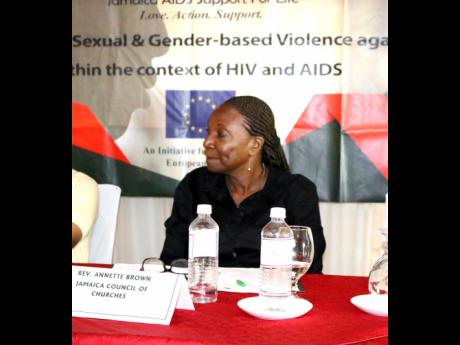 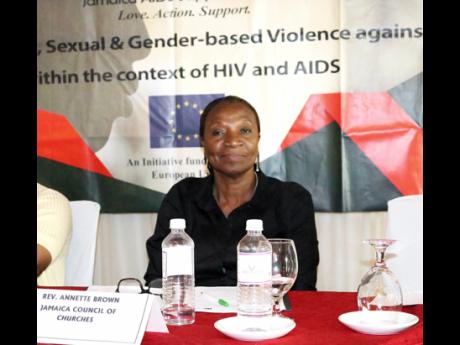 There are times when talk is not enough, and strong, maybe even controversial actions, have to be taken. No one knows this better than Reverend Annett Brown, who admitted that she punched a male member of her church in the face several times because he was repeatedly abusing his wife.

Brown, who was representing the Jamaica Council of Churches at a public forum on Violence Against Women at the Terra Nova Hotel in St Andrew yesterday, said that while she was not glorifying her actions, she would never condone women she came in contact with staying in abusive relationships.

The pastor started her address to the gathering: "I begin with a controversial story. One Sunday morning, I punched a man in his face four times because he was abusing his spouse and even after much counselling and talking to, he decided to escalate it. He thought that by coming into worship and abusing her, he was going to get away with it, and I was just fed up."

It didn't stop there.

"After punching him, all the women on the choir and all the women in the church came down and gave him a good spanking. I say this because one of the challenges we face as a Church is that the language we use, and even the Holy Scripture we use, tends to support the abuse of women," Brown told the forum, which was hosted by Jamaica AIDS Support for Life.

USE SCRIPTURE IN PRACTICAL WAYS

The reverend said that it was important that members of the clergy are able to deal with the realities of the 21st century and that scriptures are used in practical ways.

"One of the things in terms of strengthening the institution as a church is to look at the language you use. We talk about women submitting to their husbands and you are not to divorce and the woman must obey," Brown said.

"Some members of the clergy have not been trained. I didn't receive any training at all on how to deal with abuse and HIV."

In giving a different perspective, Paula Llewellyn, director of public prosecutions, reiterated the fact that persons must be reminded that the legal fraternity is bound by the law, and unless persons, especially women, are willing to come forward with evidence, there is little that can be done to assist victims of domestic violence.