PSOJ unhappy with treatment of SOE detainees in MoBay 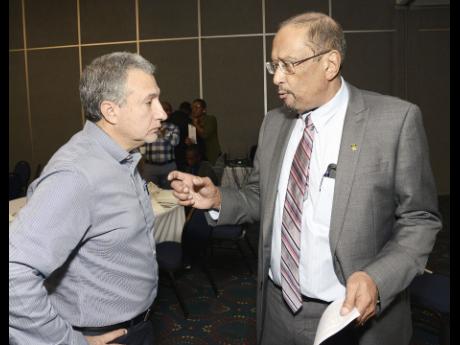 Howard Mitchell, president of the Private Sector Organisation of Jamaica (PSOJ), has reacted with dismay at the recent revelation about the treatment of detainees under the state of public emergency (SOE) in St James.

Mitchell said the PSOJ was not pleased with information provided last week by Public Defender Arlene Harrison Henry, who charged that little or no thought was given to the processing, accommodation, health and well-being of detainees before the SOE was declared on January 18.

According to Mitchell, while all well-thinking members of the Jamaican society must support the efforts to contain crime, the process must be better organised.

"We are not happy about the data provided by the public defender. We are not happy that they have detained about 4,000 mostly young people and we are only able to charge from that group 150. It means we collected very little data as we promised to do in our investigative strategy," Mitchell told a PSOJ President's Breakfast Forum in New Kingston yesterday.

"Of those 4,000 people (detained), there were about 100 children kept in deplorable conditions, which, by reports, were not fit for human consumption."

He argued that there is a capacity problem in the country and hinted that this could have resulted in proper arrangements not being put in place for the detainees.

But Mitchell said the State was wrong in giving assurances that measures would have been in place when the SOE was announced.

"For God's sake, when we start out on an exercise like the state of emergency, please, do not start by saying that you have made arrangements for the detainees and that they would be kept in the best human conditions," Mitchell declared.

"Personally, I was told that they were going to be fed ackee and salt fish for breakfast every other day."

According to Mitchell, by overstating the arrangements for the detainees, the State created a false impression, which undermines the confidence of the people in the security forces.