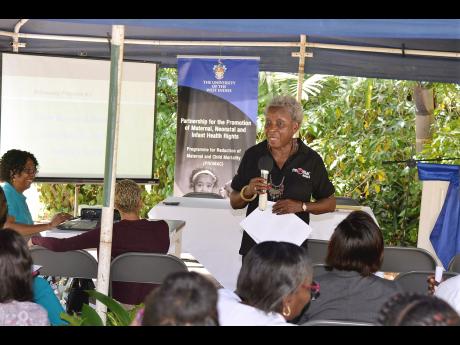 Linnette Vassell, advocacy specialist in the Partnership for the Promotion of Patients' Rights in Maternal, Neonatal and Infant Health (MNIH), says her organisation will be pushing for the institution of guidelines to protect the human rights of patients and medical professionals in Jamaica's health-care system.

Vassell made the announcement on Monday during a town-hall meeting that was part of the International Human Rights Day celebrations at the Montego Bay-based Family and Parenting Centre in St James.

"We in MNIH are calling for a number of measures or guidelines to protect the rights of patients and providers, and we're pushing for careful documentation of abuses within the healthcare delivery system. We are also proposing remedies, including legal ones, to redress abuses," said Vassell.

"We're talking about training for patients and providers on the human-rights framework. Both sides need to be in a partnership where we recognise each other's rights and responsibilities. We want to see an improvement in the system, because our mandate is to push that understanding and application of human rights in health."

Vassell also made a call for Jamaica to embrace its founding role in the institution of Human Rights Day by the United Nations in 1968.

"In 1968, Jamaica was the country that proposed to the United Nations that a day should be celebrated as Human Rights Day. We were at the forefront of the international efforts to have Human Rights Day recognised, and we have a rich history and a legacy that we must build on as defenders of human rights," said Vassell.

MNIH is a component of the Programme for the Reduction of Maternal and Child Mortality, an intervention initiative from the European Union, which is being implemented by the University of the West Indies' Department of Community Health and Psychiatry.

As part of its ongoing thrust to promote the recognition of human rights in the health sector, MNIH will be holding a discussion forum with the Nurses' Association of Jamaica on Friday. The discussion will focus on human rights in patient care.