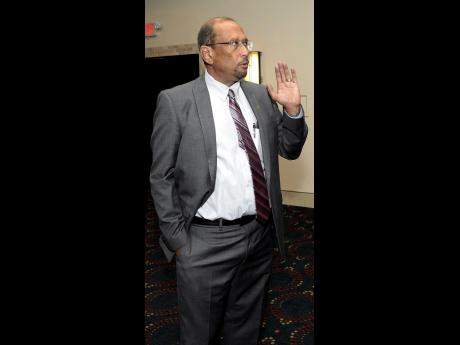 Howard Mitchell, president of the Private Sector Organisation of Jamaica (PSOJ), has indicated that he wants to know if further extensions of the states of emergency (SOEs) are legal before giving them his blessing.

"I fully understand it and understand the technical reasons behind it, but as a citizen of the country, we have to remember that we are supposed to be a nation of laws, so we have to urgently determine if the state of emergency is legal and, if it is legal, I am quite prepared to rely on the expertise of the security chiefs, but if it is not legal, then we can't do it," Mitchell told The Gleaner.

His comments come on the heels of a press release by National Security Minister Dr Horace Chang on Saturday, in which he expressed disappointment at the Opposition People's National Party's decision to withdraw support from the extension of the SOEs in a move the party described as "the right thing, the lawful thing (and), the constitutionally approved thing".

The PSOJ president said a challenge to the SOEs should be brought to the courts in order to offer clarity on their legality.

He added, "Once it is illegal, if it is determined to be illegal, there can be no justification for a state, a sovereign state governed in the way that we have been governed, the kind of constitution that we have, to do something illegal. So let's find out if it's illegal."

Meanwhile, in the statement, Chang highlighted that without the SOE, the framework where the Jamaica Defence Force can act independently of the Jamaica Constabulary Force to take immediate advantage of intelligence and apply operational strategies to secure a wide geographic area would be unavailable.

The St James SOE will end on January 31, 2019, in St Catherine North on January 2, and in sections of the Corporate Area on January 7.