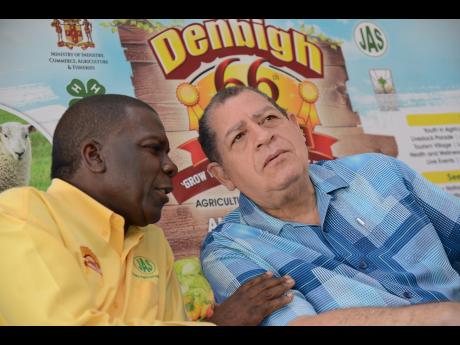 Rudolph Brown
Former JAS president Norman Grant (left) in discussions with Minister of Agriculture Audley Shaw at the launch of 2018 Denbigh Agricultural, Industrial and Food Show. Grant could find himself out of the leadership of the JAS if he fails to win a branch society election come Thursday.

Members of the Kingston and St Andrew Association of Branch Societies of the Jamaica Agricultural Society (JAS) will vote on Thursday in an election that could have historical significance for the local farming sector.

If incumbent president chartered accountant Norman Grant fails to beat back the challenge of Albert Green, vice-principal of Mavis Bank High School, it would be the first time in many years that Grant would not be a member of the JAS executive.

For Green, it would herald a foray into representation for farmers at a time when coffee, the main crop for his constituents, is in decline and disarray.

The election, which should have been held on Thursday, June 6, was delayed after the chief justice upheld a submission by farmers Jack Allen, Green and Thomas Mayne that Grant's decision to block the direct registration of a list of some 165 JAS members was wrong.

Grant, who was then president of the JAS and chairman of the board of directors the Kingston and St Andrew body, had cited constitutional breaches in blocking the registration of the farmers.

After rejecting that list, effectively preventing the persons named from voting in the elections, Grant submitted another list to the board for approval.

The aggrieved JAS members then sought, and won, an injunction, bringing a premature end to the voting after it started on June 12.

At the first mention date on Monday, June 18, Chief Justice Brian Sykes directed Grant to have his board meet and affirm the registration of the 165 persons whose applications had been rejected.

With Grant deciding not to challenge the decision, the way was paved for the election to be held on Thursday.

When The Gleaner contacted Grant last week, he declined to speak on the matter, but Green told our news team that his challenge was in response to a call from area farmers for better representation, given the deplorable state of the coffee industry.