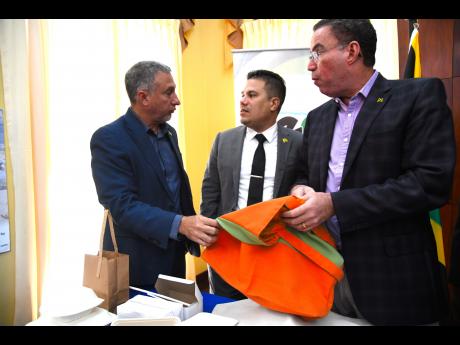 Norman Grindley
Metry Seaga (left), president of the Jamaica Manufacturers and Exporters Association, speaks with Daryl Vaz (right), minister without portfolio in the Ministry of Economic Growth and Job Creation, and Matthew Samuda during a press conference to provide an update on the ban on single-use plastics and styrofoam-based products, held at Jamaica House in St Andrew yesterday.

The Jamaica Environment Trust (JET) says it stands in support of a planned winding down of operations at the Riverton City disposal site in St Andrew to move centralised waste-management activities to other sites across the island.

The announcement was made by the head of the enterprise team, Lyttleton 'Tanny' Shirley, during a press conference held yesterday at Jamaica House to address concerns about the ban on single-use plastic bags, straws, and styrofoam.

"We are in support of this move by the Government, which is also expected to include divestment of the waste-management functions of the National Solid Waste Management Authority (NSWMA) to a private investor, who is yet to be determined. JET calls on the Government to move swiftly in taking this much-needed action to address the environmental and public-health hazards associated with the Riverton City dump, and we look forward to further announcements on its progress," said Suzanne Stanley, JET's chief executive.

The press conference was called by Daryl Vaz, minister without portfolio in the Ministry of Economic Growth and Job Creation with responsibility for land, environment, climate change and investment, to address concerns expressed by the public and other stakeholders, including JET, about the implementation and enforcement of the ban on single-use plastic bags, plastic straws, and imported styrofoam food and beverage containers, which came into effect at midnight last night.

Stanley stated that JET was also in support of the bold action by the Government and noted their intention to ramp up the much-needed education and enforcement efforts around the implementation of the ban.

"JET remains particularly concerned about the impact the ban on single-use plastic bags, commonly referred to as 'scandal' bags, will have on the containerisation of garbage," Stanley said.

She noted that long-awaited public-cleansing regulations, which are needed to enforce the containerisation of waste, have not yet been finalised.

Stanley said that JET has called on the Government to fast-track the implementation and enforcement of these and other outstanding solid-waste regulations to ensure that the implementation of the ban on scandal bags does not have unwanted negative repercussions for garbage management in the island.

Vaz disclosed that the Government is yet to decide on a compensation method to apply to businesses with an existing inventory of single-use plastic bags that fall under the ban.

He said that it was recommended that retailers contact their suppliers regarding unused inventories of these items to facilitate the Government's determination with respect to the type and method of compensation that would be applied.

"We will not deal with everybody, but we will deal with the distributor, manufacturer, and importer, which are a smaller group, and we will work out a compensation package. I would urge them to make use of the waiver in that the inventory they have may be used until depleted. And those businesses that have the reusable bags can begin using those immediately.

"The old inventory when returned will be compensated using a method that is to be determined by the finance ministry," added Vaz.

He said that it was important that the Government get as much single-use plastics out of the system and out of the trade without disrupting the transition.

Pressed for answers, Vaz said that stakeholder consultations, which included members of the affected sector groupings, had gone well and that the Government was extremely pleased with the overwhelming national reaction and response to the policy announcement, which has been extremely positive.

Effective immediately, all stocks of single-use plastic bags of dimension 24" X 24" and thickness of 1.2 millimetres or less (scandal bags) and disposable plastic straws should be embargoed by manufacturers, importers, and distributors in a manner prescribed by the National Compliance and Regulatory Authority.

"Let me add that there are some businesses that have not yet received their alternative packaging supplies and have a small amount in stock. We have seen evidence of their supplies arriving late in January to February," he said.

Vaz announced that two ministerial orders had been gazetted, one under the Trade Act and the other under the Natural Resources Conservation Authority Act. The orders provide the regulatory framework to support the policy measures announced.

The maximum fine under the Trade Act (Trade Plastic Packaging Material Order) 2018 is J$2 million, while under the NRCA (Plastic Prohibiting) Order 2018, the fine is J$50,000. Both orders carry a term of imprisonment of two years, respectively.