'Get it together!' - Clergy calls on Holness and Phillips to put people before politics 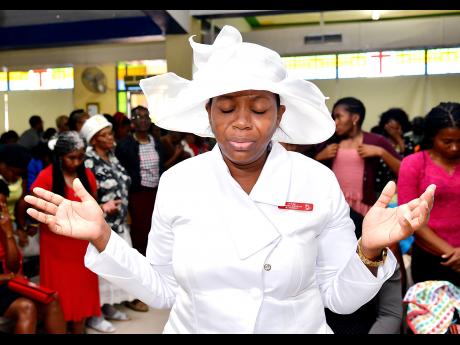 Kenyon Hemans
Nadine Thomas prays for the healing of the nation at the Power of Faith Ministries’ annual Heal the Family, Heal the Nation Conference held yesterday at the church’s headquarters in Portmore, St Catherine.

Bishop Dr Delford Davis, chief coordinator of the Heal the Family, Heal the Nation Conference, made an urgent appeal yesterday to Jamaica's political leaders to desist from using crime and violence as a platform to gain mileage and instead put the people first.

Speaking with The Gleaner during the annual conference, which was held at the Power of Faith Ministries headquarters in Portmore, St Catherine, the senior pastor said that both Prime Minister Andrew Holness and Opposition Leader Dr Peter Phillips needed to come together for the sake of the country.

"When it comes to crime and violence and the stability of our nation ... it should not become a political football. One should not seek political mileage or gains from taking a position or opposing what might be good for the nation," he said.

"What I'm saying is, these leaders have the ability and capacity within and around them to get together, sit at the table, and talk - seek to come to a position of unity. Right now, there is divisiveness between both camps, and the nation sees it, and we do not appreciate it," he declared.

"I would say, for Jamaica's sake, let us come together and find a solution for the way forward. It is there. We don't have to search far for it," Pitkin reasoned.

Holness, on Monday, issued a formal invitation for a meeting to be held with Phillips and his team on Wednesday following the Opposition's decision to withdraw its support for the states of emergency to be continued in St James, St Catherine North, and sections of the Corporate Area.

In a statement on Tuesday, however, Phillips contended that "given the short notice", a meeting on Wednesday would not have been possible.

At the same time, Davis did not spare his colleagues in the clergy as he strongly advised pastors and other church leaders to ensure that secularism did not overshadow the mandate of the Church.

"My message targets everyone, but in a special way, it targets the Christian community because I'm saying we have failed somehow. I am here to say to Christian people from all denominations, 'Rise out of slumber, and let's get ready to seek the Lord so that the world can see the manifestation'," he urged.

Davis related the Bible story in Acts Chapter Two, where 3,000 persons were converted to Christianity. "After we (pastors) get through preaching 3,000 sermons across Jamaica, maybe we don't have three souls, so something is wrong. I'm saying, 'Church, let's get it together!'"