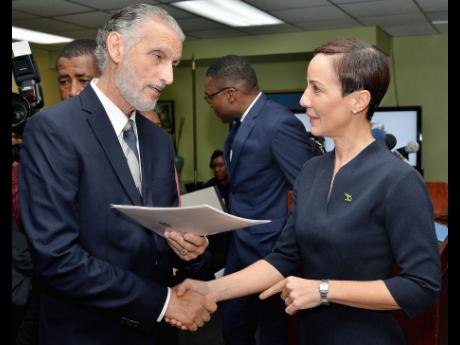 The parliamentary Opposition is terming as premature and unwarranted, a likely move by the Government to introduce legislation to retake ownership of the 49 per cent shareholding in Petrojam held by Venezuelan state-owned oil and natural gas company, PDV Caribe.

Minister of Foreign Affairs and Foreign Trade, Senator Kamina Johnson Smith, revealed at a press conference yesterday that Cabinet had determined that Parliament will take decisive action, in short order, to secure ownership of PDV Caribe's stake in the state-owned oil refinery.

However, Opposition Spokes-man on Energy Phillip Paulwell has made it clear that the Opposition is against what he labels a "hostile takeover" of the shares.

Paulwell, in a statement yesterday, argued that the move was particularly rushed, given that the Chris Zacca-led committee that was appointed in July last year to look at the future of Petrojam is scheduled to report in May 2019 on its findings and recommendations.

"The expropriation will cause ripple effects to be felt in the local and international investor community for some time," Paulwell asserted.

"This hostile approach is uncharacteristic of Jamaica, and may, in fact, be detrimental to our future negotiating capacity with other foreign investors."

He further cautioned: "The expropriation of investor property must always be a last resort, demonstrably justified in a free and democratic society, and only after exhausting all reasonable avenues for an amicable settlement."

OFFER MADE TO VENEZUELA

Johnson Smith had noted earlier that offers had been made to the Venezuelan government for its Petrojam shares, the first of which was made in the Venezuelan capital of Caracas in March 2018. She noted that this offer was yet to be taken up.

Johnson Smith further stated that the decision to retake the shares was premised on Venezuela not fulfilling its obligation in upgrading and expanding Petrojam's plant, which, she said, posed a risk to the economy.

The foreign minister further declared that Jamaica's decision to retake the Petrojam shares was in no way political, but "purely economic".

"It has become clear that the shared priority and interest in Jamaica's energy security, which drove PCJ (Petroleum Corporation of Jamaica) and PDVSA to work together to operate and upgrade Petrojam, no longer exists," said Johnson Smith.

"We believe that it is unfortunate that we have reached this point, but we also are quite clear that in order to prosper and to uplift the Jamaican people, we must ensure our energy security," added Johnson Smith.

Meanwhile, an official from the Venezuelan Embassy has since described the matter as a "delicate one", which is being discussed in Caracas.

PDV Caribe, an affiliate of the state-owned Petroleos de Venezuela S.A., and PCJ entered into a joint-venture agreement and an agreement to sell shares in Petrojam in August 2006 and February 2007, respectively.

The agreement included the upgrading and expansion of the refinery to improve its competitiveness and meet local and international market demands.