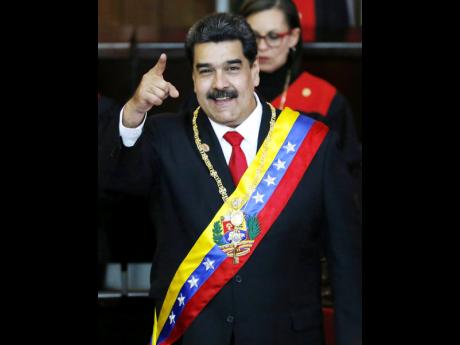 AP
Venezuela’s President Nicolás Maduro greets guests after taking the oath of office at the Supreme Court in Caracas, Venezuela, yesterday. Maduro was sworn in to a second term amid international calls for him to step down and a devastating economic crisis.

Jamaica yesterday sided with 18 other members of the Organization of American States (OAS) in favour of a resolution not to recognise the legitimacy of Nicolas Maduro's new term as Venezuela's president.

The resolution was passed in Washington minutes after Maduro was sworn in for a second term in Caracas, Venezuela, and included a demand for new presidential elections - with all necessary guarantees of a free, fair, transparent, and legitimate process - to be held at an early date, attended by international observers.

The resolution also underscored that the OAS Permanent Council and the Meeting of Consultation of Foreign Ministers remained ready to engage in diplomatic initiatives, including good offices, aimed at promoting dialogue in Venezuela, with a view to arriving at a political solution to the crisis in that country.

It was approved with 19 votes in favour, six against, and eight abstentions, with one member absent.

Fernando Simas Magalhaes, ambassador and permanent representative of Brazil to the OAS, took a direct stance against those member countries that abstained or voted against the resolution.

"This union cannot remain submissive before a country that today suffers the consequences of a brutal dictatorship. Those that [remain silent] before the regime of Nicolas Maduro or that abstain are an obstruction to the work of the organisation," said Magalhaes at the end of the meeting.

But Venezuela's Ambassador Samuel Moncada called the measure "a hostile act ... against the will of our nation".

WE CONTINUE TO MAINTAIN THE HOPE

In a statement yesterday evening, Minister of Foreign Affairs and Foreign Trade Kamina Johnson Smith said: "The Government of Jamaica, in supporting the resolution, acknowledges that the fundamental values and principles, including the maintenance of the rule of law, respect for human rights, and democracy, as well as non-intervention in the internal affairs of states, remain pertinent considerations ... like the several countries represented here. For us, our interest has always been, and continues to be, that of the well-being of the people of Venezuela. Jamaica stands ready to lend any support that may be deemed helpful and that could facilitate renewed dialogue to alleviate the serious challenges facing Venezuela. Jamaica continues to support those principles."

The statement also noted, "We continue to maintain the hope that dialogue will take place among the parties, consistent with our position that the people of Venezuela should have the opportunity to resolve their various issues through dialogue at the national level.

"Even as Jamaica took this vote, we were also represented by our embassy in Caracas at the swearing-in ceremony of President Maduro as a sign of our interest in remaining engaged with Venezuela, with which we maintain diplomatic relations."

Jamaica's vote at the OAS yesterday was the latest development in a seeming thawing of the close relationship between Kingston and Caracas.

On Tuesday, Johnson Smith announced that the Government is to introduce legislation to retake ownership of the 49 per cent shareholding in Petrojam held by Venezuelan state-owned oil and natural gas company PDV Caribe.

In making the announcement, Johnson Smith stated that the decision to retake the shares was premised on Venezuela not fulfilling its obligation to upgrade and expand Petrojam's plant, which, she said, posed a risk to the economy.

Johnson Smith said that offers had been made to the Venezuelan government for its Petrojam shares, the first of which was made in March 2018, and the offer was yet to be taken up.

The foreign minister declared that Jamaica's decision to retake the Petrojam shares was in no way political but "purely economic".