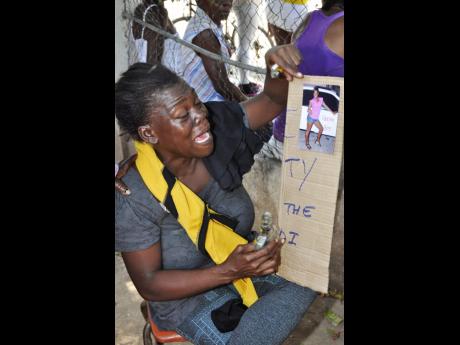 File
Veronica Nelson, mother of Vanessa Kirkland, wails after the teenager was fatally shot by members of a police party on March 20, 2012.

Defence attorneys yesterday suggested that the police were in pursuit of the blue Suzuki Swift motor car along Spanish Town Road in St Andrew on March 20, 2012, when they were fired upon by occupants of the vehicle and took evasive action. This resulted in the death of Immaculate Conception High School student Vanessa Kirkland, who was a passenger in the vehicle.

During cross-examination, Bailey's attorney, Oswest Senior-Smith, suggested that the police put out an alert to be on the lookout for a blue Suzuki Swift as the occupants were believed to have committed a robbery in Portmore on the night Kirkland was killed. The attorney further pointed to this as the reason why the police were in pursuit of the vehicle.

But the witness, who testified to being an occupant of the vehicle, rejected the suggestion and insisted that he and the other five occupants had only travelled between Three Miles and Norman Lane that evening.

It was further suggested by Hayles' attorney, Nadine Guy, that the police were pursuing the motor car, but the witness did not agree.

Guy also noted that shots came from the vehicle as it turned sharply on to Norman Lane from Spanish Town Road in order to evade the police, but the witness responded, "Nothing like that."

She also asked, "After the exchange ended, you came out of the vehicle and to the ground?"

The witness responded, "I came out and the police shub me with him foot."

Earlier this week, the witness, who was 22 years old at the time of the incident, said that he was a passenger in the car when they dropped off the four female occupants in Three Miles to sell fish fry tickets and returned to Norman Lane.

He said that they went back for the females minutes to 8 o'clock that same night, and on returning to Norman Lane, they saw a police vehicle. Soon after turning on to the road, the witness said the police opened fire on them.

Smith is being represented by attorney Peter Champagnie.

Bail for the accused has been extended.