May stays, but still beset by Brexit 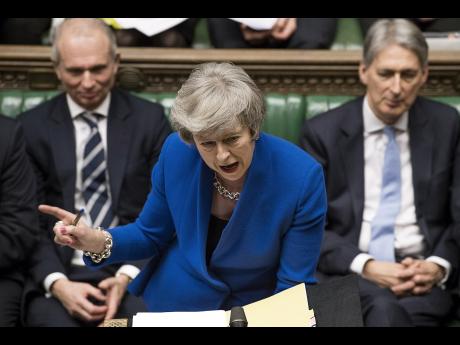 AP
Britain’s Prime Minister Theresa May speaks during a debate before a no-confidence vote in the House of Commons, London, yesterday.

British Prime Minister Theresa May survived a no-confidence vote in Parliament yesterday to remain in office but saw more of her power ebb away as she battled to keep Brexit on track after lawmakers demolished her European Union (EU) divorce deal.

Now it's back to Brexit, where May is caught between the rock of her own negotiating red lines and the hard place of a Parliament that wants to force a radical change of course.

After defeating the no-confidence motion, May said she would hold talks "in a constructive spirit" with leaders of opposition parties and other lawmakers in a bid to find a way forward for Britain's EU exit.

Legislators ripped up May's Brexit blueprint Tuesday by rejecting the divorce agreement she has negotiated with the EU over the last two years. That it would lose was widely expected, but the scale of the rout - 432 votes to 202, the biggest government defeat in British parliamentary history - was devastating for May's leadership and her Brexit deal.

Opposition Labour Party leader Jeremy Corbyn responded with the no-confidence motion and urged the government to "do the right thing and resign".