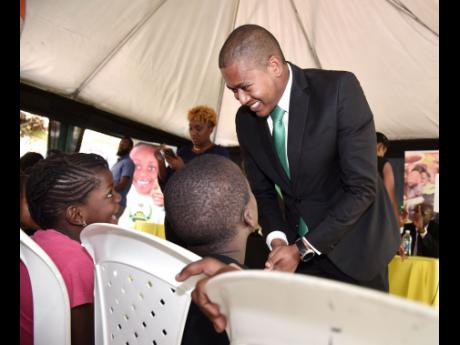 Donald De La Haye
Minister of State in the Ministry of Education, Youth and Information, Floyd Green, interacts with children from the Walker's Place of Safety during a ceremony to hand over a cheque for the rebuilding of the facility, held in January last year at Hope Zoo, St. Andrew. Fire gutted the facility on January 16, 2018, claiming two young lives.

The review of safety and security procedures at children's homes islandwide is now all but complete, and a report will be sent to the prime minister before the end of the month, state minister with responsibility for youth Floyd Green has revealed.

Green's disclosure comes one year after fire gutted the Walker's Place of Safety in St Andrew in the wee hours of the morning on January 16, claiming two young lives.

"We decided to take a more extensive look to ensure that costings were done and priority interventions identified, but the first draft is now completed," Green told The Gleaner.

Prime Minister Andrew Holness ordered the review in the immediate aftermath of the blaze, declaring then that when such incidents happened, they triggered an administrative response, which is to review what actually happened.

"From whether or not the building was appropriate, whether or not we need to spend more resources to build better facilities, whether or not there was negligence, and just to make sure that the places of safety are actually safe places," Holness said back then as he stood among the burnt-out remains of the Lyndhurst Crescent facility hours after.

Twelve-year-old Anika McCrea and 16-year-old Annakay Moreland perished in the hellish blaze that also temporarily displaced 34 other wards and their caregivers.

The fire report, which followed two and a half months later, indicated that the blaze was caused by an electrical short circuit that originated in a dorm on the first floor on the west side of the building.

By his own admission, Green stated that there are still very fresh feelings of pain and sadness but shared, too, that there is a long-lasting appreciation that the "best of Jamaica" was on display on that dreaded night, likely preventing further loss of life.

He noted that three individuals were subsequently awarded the Badge of Honour for gallantry for their act of heroism in rescuing those trapped by the fire at the premises.

"It's still a very difficult situation to think about, but it's sadness mixed with hope," Green expressed.

The state minister further reiterated that the Government remained steadfast in its plans to construct a state-of-the-art place of safety to replace Walker's.

The new two-storey facility is estimated to cost $106 million, Green noted, pointing out that the Government, through contributions from well-meaning Jamaicans, had raised over $21 million so far.

Green added, "But clearly, that depends on the resources."

The Walker's Place of Safety serves as a transitional residence for children, generally up to 12 years old, who have been abandoned or removed from their homes because of unstable conditions.