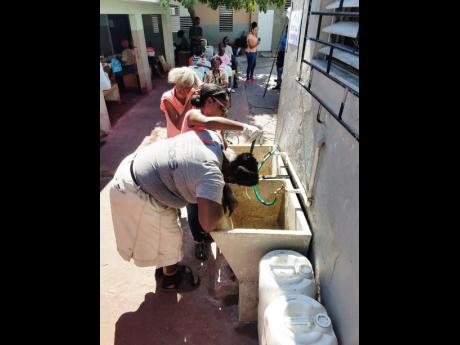 Contributed
This homeless person gets her hair washed by a Rotaract Club of New Kingston member at the Marie Atkins Shelter in downtown Kingston recently as part of activities to bring healthcare to the less fortunate.

More than 100 homeless persons in and around downtown Kingston were treated by the Rotaract Club of New Kingston last week at the Marie Atkins Shelter.

They were able to access dental care, including cleaning, fillings, and extractions by the Jamaica Dental Students' Association; hair washing, combing, and trimming, done by club members and friends; and medical checks by club members who are doctors.

HIV tests and counselling by CHARES; free eye testing, screening, and glasses, provided by the Mona Lions Club; and cooked lunches were also made available.

Chantal Harriott, the club's community service director, explained that the project not only tapped into the vocations of the membership, but also those of Rotarians, friends, and families and served as a means of sharing with the less fortunate in the society.

"We were able to search within our network and get the necessary help that the individuals needed, and it was extremely well received. Members have told of instances where they were hugged and kissed in sincere appreciation by the recipients as they were so happy with what we had brought to them," Harriott said.

Now in its 15th year as a club, and sixth year of delivering this project, Rotaract New Kingston also donated clothing and several bags of tinned foods.

Club President Vanessa Williams said that she was grateful to all her members who participated and those who contributed to the delivery of the service.

"The club is very committed to serving beyond stigmas and was eternally grateful for the sponsors and partners who came on board to ensure that the homeless were provided with the necessities.

"There were companies that told me straight out that they were already out of budget but still found a way to make a contribution to the initiative. We are grateful," Williams noted.