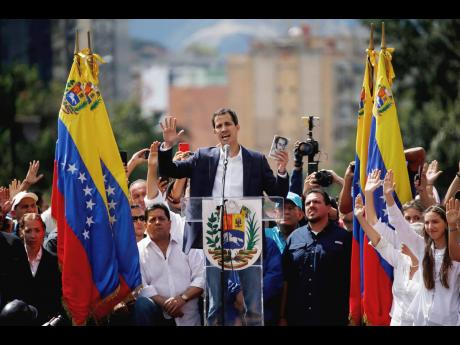 Jamaica yesterday steered clear of endorsing Juan Guaido, Venezuela’s opposition leader, as interim president, even though the politician declared himself so in a defiant speech amid widespread protests against putative head of state Nicolas Maduro.

“Jamaica is closely monitoring the latest developments in Venezuela. We wish to make clear that our primary concern remains for the well-being of the people of Venezuela, the maintenance of democracy, respect for human rights, and the rule of law,” the press release read.

However, Johnson Smith made it clear at last Tuesday’s event at Spanish Court Hotel, New Kingston, that Jamaica was not pursuing the option of legitimising the opposition. “We have not taken any position in respect of the opposition. We have heard the discussions about recognising an alternative government, but Jamaica has not been exploring that option,” Johnson Smith told the audience.

Two weeks ago, the Jamaican Government announced that it was seeking to forcibly retake ownership of Venezuela’s 49 per cent stake in the local oil refinery, Petrojam, because the PDVSA subsidiary, PDV Caribe, had failed to honour its pledge to undertake a billion-dollar upgrade of the obsolete plant.

That announcement was followed two days later by Jamaica’s decision to vote with 18 other members of the Organization of American States to reject the legitimacy of Maduro as president after what they dubbed a rigged election.

“Our vote in the OAS was not a break with Jamaican foreign policy. We always vote on human rights, democracy, and the rule of law, which was what we did. The last elections [won by Maduro] did not comply with international standards for free and fair elections. The vote on this occasion was consistent with our support for key principles,” the minister explained.

The Holness administration has not said whether it will order Venezuela to recall its ambassador to Kingston.

Representatives from the US Embassy in Kingston and Opposition Spokesperson on Foreign Affairs Lisa Hanna could not be reached for comment on the developments.

Jamaica and Venezuela have shared formal diplomatic relations since 1965 and have forged sentimental cultural ties dating back to Simon Bolivar’s Jamaica Letter in 1815. Both countries have also had oil pacts dating back to the 1980.

In a tit-for-tat diplomatic squabble, Maduro cut formal relations with the United States and gave its ambassador a 72-hour deadline to pack his bags and go.

“I am the only president of Venezuela,” Maduro was quoted by The Associated Press as saying. “We do not want to return to the 20th century of gringo interventions and coups d’etat.”

Earlier, Trump said, “The people of Venezuela have courageously spoken out against Maduro and his regime and demanded freedom and the rule of law.”