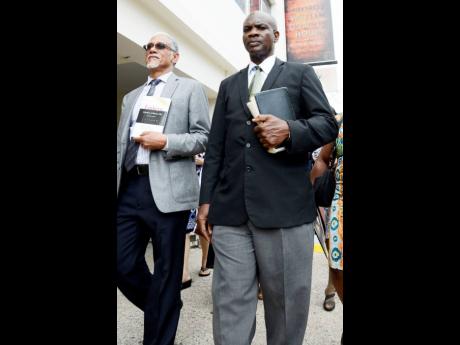 Major Richard Cooke (left) and Alvin Bailey, bishop of the Holiness Christian Church, yesterday march to Gordon House to protest against a motion moved in Parliament to decriminalise abortion.

An emotional Father Richard Ho Lung yesterday declared that he would rather face death than have the future of Jamaica eliminated through the legalisation of abortion.

“It is better for us to eliminate our whole race, our whole country. I prefer to die than have our children be eliminated. It’s very important you understand that,” Ho Lung said steps away from the Parliament building on Duke Street in Kingston, where a debate was scheduled on the motion to legalise abortion yesterday.

Ho Lung was among several church leaders who stood in unified protest against the motion moved in Parliament in June last year by West Rural St Andrew Member of Parliament Juliet Cuthbert-Flynn for the Government to decriminalise abortion and provide women with safe and affordable methods to terminate pregnancies.

“Once I heard of this matter of abortion being pushed, I know you are talking about very big money. You’re talking about billions of dollars [by persons] who want to suppress the growth of the populations in smaller countries instead of helping them,” Ho Lung said.

Holding no punches, the soft-spoken Ho Lung said that to legalise abortion is the same as saying, ‘Thou shall murder. It is permitted to murder while it is inconvenient.’

“Of course, it is inconvenient. Life is inconvenient, but I would prefer to see that I die than the future of our country eliminated and be killed. I really prefer that. And people need to know that’s how serious it is. This is not just a piece of flesh in a mother’s womb. This is a baby, this is a person, and that person has no option,” he said.

In tabling the motion, Cuthbert-Flynn stated that all parliamentarians in the House had a moral obligation to ensure that women be given the option of safe and affordable methods to terminate pregnancy. She cited a 2018 Bill Johnson survey which found that 67 per cent of men and 82 per cent of women indicated that women should have a right to terminate their pregnancy and not the Government.

Dr Alvin Bailey, bishop of the Holiness Christian Church and president of the civil group Jamaica CAUSE, a grouping of churches concerned about the advancing attack on Jamaica’s sovereignty, said that the Church is taking a stand against what he termed a cruel act against innocence.

“We stand unified as the Church in Jamaica against abortion. We believe that life begins at conception, and so the Church needs to make its voice known. We can’t be silent in a country we say is Christian in its orientation and beliefs. Therefore, we believe it is extremely important to do this,” he stated.

“We are aware that there are international associations and partners that would want Jamaica to go in a particular direction in the new trend of things, but we are saying, let the sovereignty of every country and the uniqueness of it and the cultural situation dictate our destiny. We are saying the Church will not be silent. We don’t plan to be still on this matter,” said Bailey.