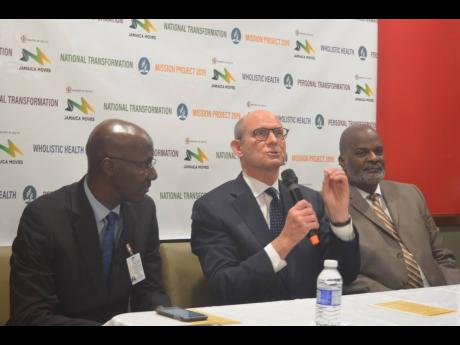 Jamaican lawmakers are obligated to observe the sanctity of life as they mull over the hot-button issue of abortion, the most senior Seventh-day Adventist leader globally warned on Friday, just two days after the controversial debate boiled over in Parliament.

But while reaffirming his denomination’s general stance against abortion, Pastor Ted Wilson, president of the General Conference of Seventh-day Adventist (SDA) Churches, conceded that terminations would be justified in mitigating circumstances.

“We do urge that lawmakers give strong adherence and cognisance to the sanctity of life. Most Adventists would be very supportive of the sanctity of life and not in favour of abortion unless the mother’s life was in danger or there was incest or rape involved, and that’s left to the individual to decide.”

Wilson, who is on an 11-day visit to Jamaica, addressed journalists yesterday afternoon shortly after his arrival at Sangster International Airport in Montego Bay, St James. He is here to take part in the church’s Mission Project 2019 for community outreach through health education.

On Wednesday, clergymen and anti-abortion campaigners went to Gordon House to make submissions at a meeting of Parliament’s Human Resource and Social Development Committee, where Member of Parliament Juliet Cuthbert-Flynn’s motion to decriminalise abortion was under debate.

Last June, Cuthbert-Flynn tabled a private member’s motion to repeal Sections 72 and 73 of the Offences Against the Person Act and substitute them with a civil law, The Termination of Pregnancy Act, as recommended by the Abortion Policy Review Group in 2007.

In the meantime, Wilson noted that while Seventh-day Adventists may hold strong opinions on topical issues and would be passionate in its advocacy, the Church would not interfere in the political legislative process.

“When it comes to health, social issues, or those things that will make life sweeter and better, whatever scripture says is what we’ll advocate, and even lobby for, but without becoming highly political,” he said.

“There will be certain causes that Adventists will give very strong support to, but we’ll not try to meddle politically in the process of decision-making except to portray the beautiful principles that the Bible has outlined.”