Previous years to be revised 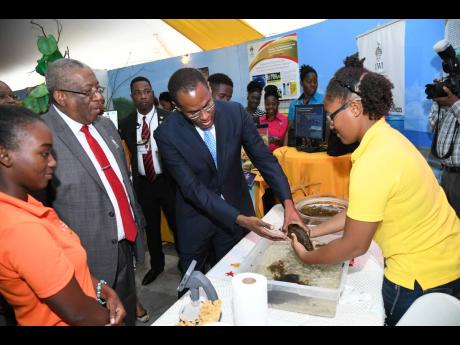 Finance Minister Dr Nigel Clarke seems more fearful of handling this sea cucumber than the upcoming Budget estimates while attending the opening ceremony of The University of the West Indies (UWI) Research Days at the university’s Undercroft on Wednesday. Looking on are Dale Webber (second left), pro vice-chancellor and principal of The UWI, and Jalisa King (left) and Jodi-Ann Burton, interns at the Discovery Bay Marine Lab.

Research and development (R&D) will be included in Jamaica’s measurement of gross domestic product (GDP) as of September 2020 onwards, Finance Minister Dr Nigel Clarke has revealed.

GDP measures a country’s economic activity and is defined as the value of all final goods and services that have been produced within a country in a particular year.

“Eventually, it will be in the quarterly (GDP) numbers, but from September 2020, it will be in the annual numbers,” Clarke disclosed yesterday during his keynote address at the opening ceremony for the University of the West Indies Research Days 2019.

However, in 2008, the United Nations Statistical Commission started a revision to the System of National Accounts (SNA) methodology used to measure economic output to treat R&D spending as an investment rather than as an intermediate input.

Currently, the Statistical Institute of Jamaica (STATIN) utilises the 1993 revision of the SNA, but Clarke stated that Jamaica would be incorporating the 2008 update by next year.

“Also, what will happen in September 2020 is that the previous years will be revised to take into account research activity over those years,” said Clarke.

Clarke, in underscoring the Government’s conviction of the fundamental role that research can play in social and economical development, further disclosed that provision was made in the upcoming Budget for a “modest allocation” specifically for research at the tertiary level.

“By doing so, we will be making our intention clear that research is fundamentally important to the growth and development of Jamaica, but we need to do it in a way that can be sustainably maintained. We have priority areas where knowledge needs to be developed, and further allocation from this pool to research activities will be done on a competitive basis and will be aligned with those priorities,” Clarke added.

The finance minister pointed out that one of the first things to be done with the allocation is to commission research on the funding of R&D in Jamaica.

“We need to measure exactly how much we’re spending on research and where it is coming from so we can set goals going forward. If we don’t start from a basis of knowing exactly where we are, done by ourselves, not by some publication outside, then we won’t know how to set goals,” Clarke contended.