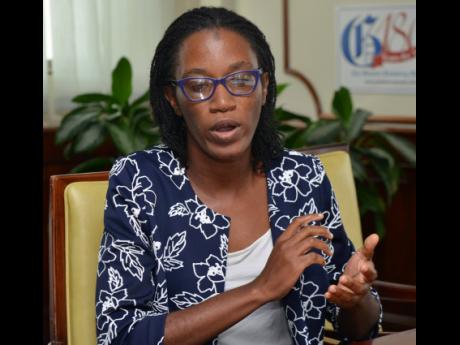 Many Jamaicans are placing their lives at risk by living and working in mould-infested homes and commercial buildings for prolonged periods, a local researcher has found.

According to Northern Caribbean University (NCU) lecturer, Dian Camoy Griffiths, a study she conducted in 2015 has confirmed that several residents living in Manchester had got ill because they were either living or working in sick buildings.

Griffiths is a graduate student from the College of Natural and Applied Sciences, Allied Health and Nursing.

“Persons were complaining of itching of the eyes, some persons had rash, some persons congestion, headache, these were some of the symptoms that came out of the investigation,” said Griffiths, whose study is titled ‘Environmental Investigation of Sick Buildings, Remedial Action and Health Impacts on Residents in Manchester, Jamaica’, she told editors and reporters last Thursday during a Gleaner Editors’ Forum.

“For those in the workplace, they complain that whenever it is that they go inside the building, that’s when the condition would generally occur, so they would start feeling stuffy. Some persons started sneezing, some persons started wheezing, but by the time they reach home in the evening, these symptoms or majority would be less.”

From her study, the 35-year-old researcher concluded that the sick-building syndrome, which many attributed to doctors and patients becoming ill at the Cornwall Regional Hospital in 2018, is real. The hospital has been hit by wide-scale respiratory illness linked to mould infestation.

The Sir Alister McIntyre Building at The University of the West Indies, Mona campus, was also dubbed a sick building in 2015 after mould infestation became an occupational hazard for students and staff.

Griffiths said she decided to focus her study on Mandeville because of the Manchester capital’s humidity. At least 70 homes and business places were investigated over six months. The air quality at each building was analysed.

During the course of the study, the researcher found that many of those she interacted with were desperate for the mould situation to be addressed so that they could enjoy their homes.

“This particular parent, she had a child that was now developing bronchitis, so when I went there, she was saying that something needs to be done, because she is not able to afford the rent to actually move somewhere else,” Griffiths told the forum. “She said that the doctor was proposing that what is actually happening to the child may be because of where she is living and the mould infestation that is taking place,” she said.

Ricardo Langley, chief executive officer at a sanitisation and mould remediation company in Kingston, said that many of his clients were actually referred by doctors. Langley’s company, Hygienely, provides indoor air-quality services and removes contaminants found in buildings.

“Based on our experience, I know that some persons who called us in have had children who have been hospitalised based on the prolonged exposure that they have had,” he told The Sunday Gleaner, while noting that someone recently told him that mould infestation contributed to the death of a friend last year.

“It can incapacitate or suppress the immune system and cause brain damage or even death, depending on the type of mould,” he said.

The air-quality issues at Cornwall Regional Hospital resulted in officials relocating several of its services and resulted in a partial shutdown of the facility for rehabilitation. An independent oversight committee has put the repair bill at $3.5 billion.

Griffiths found that some persons tried to get rid of the mould by washing their walls with water and bleach, and then repainting, but she finds that this is not very effective.

“Instead of bleaching the wall, we are proposing to expose the actual air to the bleach instead. We also looked, for instance, at Lysol, which can actually be sprayed into the air, and other extracts from, for instance, onion and pepper, which are said to have anti-fungal properties,” she noted.