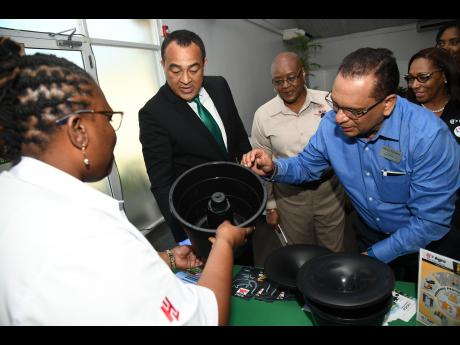 Rudolph Brown/Photographer Dr. Christopher Tufton, (second left), minister of health looks at the In 2 Care mosquito-control system with (from left) Odean Bradshaw, marketing and business development manager of Hardware and Lumber Agro; Audrey Hinchcliffe, CEO and chairman, Manpower and Maintenance Services (MMS) Ltd and Caribbean Health Management Ltd; Raoul Persuad, account executive, Univar Environmental Sciences; and Olive Downer Walsh, deputy CEO of Hardware and Lumber Ltd. They were at a client seminar on mosquito-borne diseases hosted by MMS Ltd in collaboration with Caribbean Health Management Ltd and H&L Agro at Spanish Court Hotel in New Kingston yesterday. The In 2 Care is a double killing agent (larvacide and fungicide) that attracts Aedes aegypti mosquitoes, contaminates and uses them to infect breeding sites so they can no longer transmit diseases.

Come March next year, the Government will begin releasing half a million sterile male mosquitoes into the environment per week to help slash the population of the female Aedes aegypti, which is responsible for spreading the deadly dengue virus.

“There are three ways to sterilise mosquitoes. You can sterilise them using a genetic method, using radiation, as well as a bacteria called Wolbachia,” Sherine Huntley Jones, head of the Vector Control Programme within the Ministry of Health, told The Gleaner yesterday.

“Jamaica is using the radiation methodology. At the National Public Health Laboratory in Kingston, we are into mass production of mosquitoes. We are now standardising our procedure for mass growing, with the intention of rearing enough males so we can sterilise and release them.”

Jones said that standardising factory procedures is the final stage before mass production of sterile male mosquitoes can take place.

She was speaking with The Gleaner at the Spanish Court Hotel, Valencia, during a seminar titled ‘Mosquito-Borne Diseases: Dengue Fever Impact on the Workforce and Communities’, which was the brainchild of the Manpower and Maintenance Services Limited and held in collaboration with the Caribbean Health Management Consultants Ltd and H&L Agro.

“Males do not transmit disease. Males do not bite. When you hear we are releasing mosquitoes, do not panic! The females are the ones that bite. They need the blood to develop eggs. So we will release the males with view of them mating with wild females to reduce the population,” Jones pointed out.

“We are projecting to start releasing by March 2020. We have about a million in the lab. If you go there now, you would witness the mosquitoes going through the processes. We keep them in cages and feed them on human blood from the Blood Bank and other blood as well.”

Guest speaker Dr Christopher Tufton, who is also the health minister, admitted that desired results in reducing the local female mosquito population were not being achieved through fogging because of developed resistance.

Said Tufton: “We cannot engage the same approach to tackling and controlling the mosquito population, like fogging and applying chemical to water. We visited Cayman and looked at their mosquito-control centre. They told us the mosquitoes used to literally bite cattle till death. Mosquitoes are not so much of a nuisance [there] anymore.

“So what we do is go out, collect samples, breed them, and dissect them. Through the unit, we have discovered that there is a new species of mosquito in Jamaica, which we never knew of before. So we have to apply different methods to control it,” Tufton pointed out.

There have also been a number of suspected deaths from the illness.