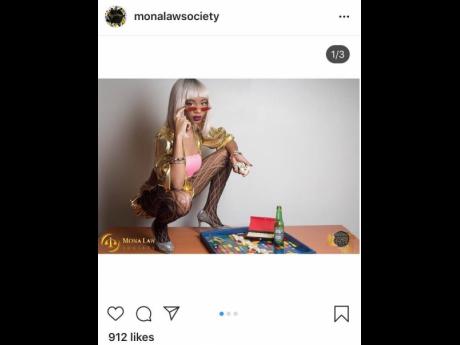 Contributed
Three of the controversial photos posted on Instagram by the Mona Law Society showing contestants in Miss Law 2019. 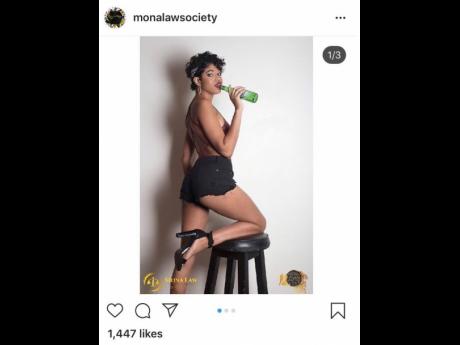 Contributed
One of the controversial photos posted on Instagram by the Mona Law Society showing a contestant in Miss Law 2019. 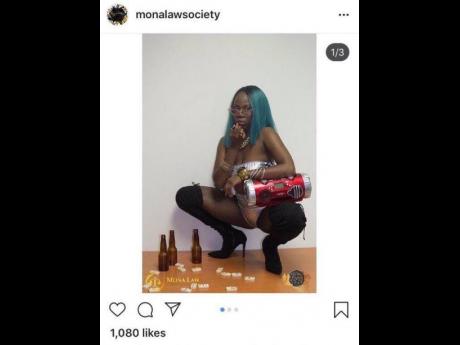 Contributed
One of the controversial photos posted on Instagram by the Mona Law Society showing contestants in Miss Law 2019.
1
2
3

The Mona Law Society at The University of the West Indies (UWI), Mona, has come under fire from at least one senior member of the law fraternity for the posting of photographs of some female law students in skimpy clothing on its Instagram social media page.

The pictures were posted as a part of the Mr and Miss Law 2019 competition, which The Gleaner understands is being held under a dancehall theme.

Describing the pictures as “vulgar, disgraceful, and reprehensible”, attorney-at-law Peter Champagnie has withdrawn his participation in the student group’s expo scheduled for next week.

In a letter addressed to the president of the law society this week, Champagnie said: “By the posting of such pictures, I am left with the inescapable inference that you do not find anything objectionable about them. Our divergent views, therefore, on what I consider to be profound, cannot accommodate my participation in your expo ... .”

In an interview with The Gleaner yesterday, Champagnie rejected assertions that his comments were an attack on dancehall.

“I enjoy all genres of music, right. It is not to be interpreted as such, but there is a time and a place for everything. What is particularly offensive about it is that it is for public display. It is not a private-viewing page, and it is associated with persons who would wish to join what I still consider a noble and respectable profession,” the attorney said, pointing out that he has two young daughters.

However, Dr Sonjah Stanley Niaah, senior lecturer in cultural studies at The UWI, was taken aback by the attorney’s views expressed in the one-page letter.

“I am really appalled [that] in Jamaica today, we still have a negative response to anything related to dancehall,” she said.

“[However], I understand in a context where there is a professional orientation, for example, for lawyers, there is a certain standard that they aim to uphold – not just coming out of Jamaica, but a legacy of our British history, and I understand all of that,” Niaah said.

The senior lecturer asserted that misconceptions surrounding dancehall must be challenged.

“The other thing I would add is that where Jamaica is concerned and where the law is concerned, we are overrun on a daily basis by the puritanical ethic that decides that anything dancehall must be vulgar, must be about licentious behaviour, must be about slackness. This is not the case, and we need to disabuse ourselves of that notion,” she added.

Champagnie’s letter was copied to Director of Public Prosecutions Paula Llewellyn and prominent attorney-at-law Christopher Townsend, who are slated to participate in the expo.