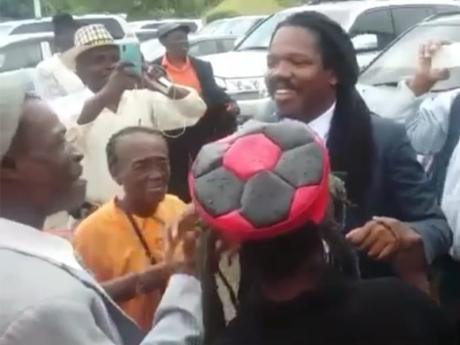 In this screengrab, Comrades greet Opposition Senator Damion Crawford as he arrives for the funeral of Dr Lynvale Bloomfield.

While Portland East constituents are still mourning their slain Member of Parliament Dr Lynvale Bloomfield, supporters say they are anxious for Opposition Senator Damion Crawford to fill the void.

Crawford is reportedly being considered as the People’s National Party’s (PNP) candidate to replace Bloomfield in the expected by-election.

When he arrived at Bloomfield’s funeral held in Folly, Portland this morning, comrades erupted in chants and cheers.

“Me want Damion come dung yah cause him is a man weh will work and we love him, yu nu see how everybody did a behave when him come,” one supporter said.

Amid the cheers, some supporters tried to hug him while some others tried to stroke his hair.

If Crawford becomes the PNP's candidate for Portland East, he will go up against the Jamaica Labour Party’s Ann-Marie Vaz, the wife of Daryl Vaz, the current MP for West Portland.