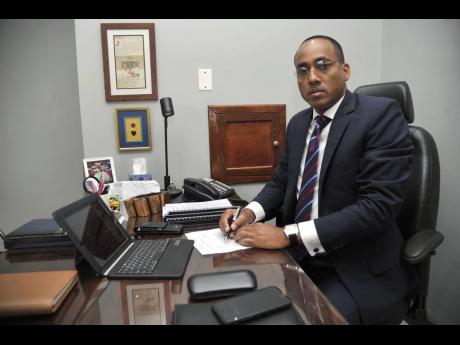 File
Attorney-at-law Peter Champagnie has ignited a firestorm after condemning the Mona Law Sociiety for photos it posted on social media and withdrawing support for the society&apos;s expo being held today.

There is division in the legal profession over attorney-at-law Peter Champagnie’s controversial lambasting of the Mona Law Society at The University of the West Indies, posting on social media, pictures of female students skimpily dressed.

Champagnie, in a scathing letter to the president of the society, last week expressed his disgust at pictures, labelling them vulgar and disgraceful and informed them that he would not participate in today’s Inaugural Legal Expo as was previously agreed.

The pictures were posted as a part of the Mr and Miss Law 2019 competition, which is being held under the theme ‘Jamaica Rewind: From a Taller Time’. The Mona Law Society said the photos were meant to pay homage to reggae and dancehall in Reggae Month.

But even as he has insisted in an interview with The Gleaner last Friday that his problem was not with dancehall, the prominent attorney, who sits on the disciplinary committee of the General Legal Council, has been put under the spotlight, accused of shaming the students because they were showcasing a culture not pleasing to the eyes of the “uptown massive”.

Among those who fired back at the prominent attorney was Queen’s Counsel Valerie Neita Robertson, who suggested Champagnie might have a bias against dancehall, the prevailing pop culture in the country.

“Lawyers are not defined by the suits they wear. For Heaven’s sake, it’s a DANCEHALL COMPETITION,” Neita Robertson lectured on Twitter adding that “they (photos) really are creative expressions. I guess you would prefer carnival outfits”.

Using the same platform, Jamaican Bar Association (JBA) President Jacqueline Cummings suggested that persons who do not know the context of the photo shoot could be led to believe it was the personality of the students.

Bert Samuels also weighed in on the firestorm ignited by Champagnie, bemoaning the “young law faculty students being openly condemned for their act posted during Reggae Month”.

One junior counsel with less than five years at the Bar hit back at the renowned defence lawyer, calling Champagnie’s letter of objection to the posts self-righteous and high-handed.

“Mr Champagnie’s approach to the whole situation was high-handed, self-righteous,” Mark-Paul Cowan, attorney-at-law at Nunes, Schofield and DeLeon, said in an open letter to the JBA. “To describe the postings as disgraceful and reprehensible in a time where the legal profession has been rocked by scandals of much greater magnitude and consequence is clearly an unmeasured response by learned senior counsel.”

The young counsel added: “Mr Champagnie also tyrannically suggested that the young students may have a challenge getting into the Bar as a result of their actions notwithstanding the fact that these students were fully clad against an obviously staged and picturesque Jamaican retro background. If we were to examine the social media accounts of all the legal professionals in the island, we would see similar and worse. What is the crime here? What is the gross unethical conduct being displayed that would warrant this lambasting from senior counsel?”

According to him, the context of their attire was important.

Cowan has called on JBA President Cummings to publicly condemn the manner in which “Mr Champagnie has rebuked and scarred these young students”.

He said it was a teachable moment, but instead, Champagnie castigated and abandoned the students by deciding to withdraw his support for today’s expo.

But unlike Cowan, who has responded publicly to Champagnie’s letter, several attorneys-at-law with whom The Gleaner spoke did not agree with Champagnie’s stance.

One senior counsel said: “Thanks to Champagnie’s letter, me and some of my colleagues going to Mona today.”

Another senior attorney said, “The learned senior counsel is not the parents of these girls. So what’s the problem? I bet you if it was a carnival outfit , there would be no problem.”

And still another said, “Lawyers are pissed about it. If you think something is wrong, call the society and deal with it and let them deal with the students.”

Former state minister in the Ministry of Culture and Gender Affairs, Alando Terrelonge, who is also an attorney-at-law, said the students had nothing to be ashamed of as they were genuinely representing aspects of the Jamaican culture.

Continued Terrelonge: “Gender inequality and women-shaming existing not because of bigoted man, but, because women refuse to unite and defend themselves against a kind of patriarchy that polices their bodies and believe that their expression of self ought to be monitored because they are property of men”.

The Mona Law Society appeared shaken by the fiasco, saying in a statement that the young ladies who were captured in the photos were most damaged from the controversy.

“They are young students who entered a competition aimed at boosting confidence through test of their general and legal knowledge, speaking ability, fitness and creativity,” it said.