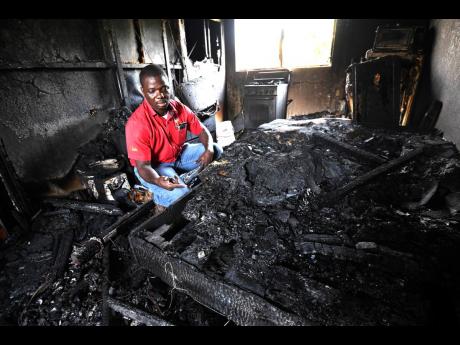 Ricardo Makyn/Chief Photo Editor
Handrel Wheatle surveys the charred remains of what was his home on DeeCee Avenue in Tivoli Gardens. He is one of about 30 persons left homeless from a fire which destroyed six homes last Saturday.

Nine years after his brother was reportedly killed execution style by the security forces, Tivoli Gardens fire victim Handrel Wheatle strongly believes that he is battling a curse.

His face a canvas of pain and despair, Wheatle stared blankly at the blackened carcass of his west Kingston home, his memories and possessions gone up in smoke.

A massive fire on Saturday afternoon swept through six dwellings on DeeCee Avenue, its flames consuming all in its path and leaving almost 30 persons – about 10 of them children – homeless.

Despite promises from the Government that money will be allocated to help get each family back on their feet, the pressure was just too much for Wheatle to bear. Fighting through frustration yesterday, he appealed to anyone who can assist to lend a helping hand.

“Sometimes I have to wonder, because people say when foreparents do certain wrongs, the repercussions reach the children. Mi affi wonder if a dat a reach we. It cuts deep!” exclaimed the Tivoli resident.

“I have to search the Oxford Dictionary to find words to describe how I feel. I lost my brother in the incursion, and we still have not got anything from that. No money never run, and den now, this come happen.

“I still can’t get to grips all now, because my brother and I were close. I know he wasn’t involved, so to see him gone like that, tears come to my eyes when I think about it. He was even in The Gleaner as the porridge man,” he recounted.

He was speaking in reference to a three-day firefight between the security forces and armed gangsters loyal to crime lord Christopher ‘Dudus’ Coke in 2010. At least 69 people, including one soldier, were killed in the violence.

“I was at work and was called by a neighbour. By the time I came and was trying to see if I can make it inside, to see what I could save, we lost everything, nothing nuh save,” he said.

One man who lived at one of the burnt-out residences told The Gleaner that he did not rule out the possibility of an illegal electrical connection being the source of the blaze. Ten people resided at his premises.

“The fire started in the back room. I couldn’t tell you exactly how it start, because I was downtown, because mi a hustler. Right now, mi want a new house. If we get a new house, we good,” he said.

Yesterday when The Gleaner visited the area, it was being toured by West Kingston Member of Parliament Desmond McKenzie and minister without portfolio in the Ministry of Economic Growth and Job Creation, Karl Samuda, to assess the damage and pledge support.

Samuda told The Gleaner that the Government would offer help to those who had suffered losses.

“The most important of all is that we restore the houses. Two of them will have to be totally demolished,” Samuda said. “In addition to that, while being here, I detected certain structural weaknesses in the high-rise buildings that, if not attended to, pose a threat to lives of especially children.”