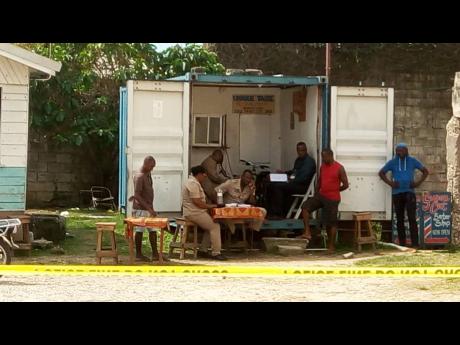 Contributed
Police personnel processing one of the crime scenes yesterday.

Terror reigned in the parish of Westmoreland between midday Monday and yesterday morning as eight persons were killed by bloodthirsty gunmen in a murderous rampage that spanned several communities.

While the carnage started on Cooke Street in Savanna-la-Mar, shortly after 1:30 p.m. on Monday, when gunmen invaded a football field and killed 18-year-old Eric Smith, it took its most gruesome twist shortly after 11 p.m., when men armed with rifles opened fire on patrons at a nightclub in Williamsfield, killing three persons and injuring four others.

Those killed have been identified as 21-year-old Jahmar Warren of Grange district in Williamsfield, Westmoreland; 34-year-old Corey Parkins of Smithfield district in Cascade, Hanover; and 23-year-old Coran Birch of Woodsville district in Hanover. Two other persons who reportedly suffered multiple bullet wounds have been hospitalised.

According to reports, the gunmen, who arrived at the location in a vehicle, walked up to the second floor of the plaza, where the club is located, and opened fire indiscriminately as patrons fled in panic, jostling to find hiding places.

“The amount a shot mi hear was like mi deh a wah war zone,” said a relative of one of the dead men, who said he heard the barrage from his home, which is some distance away from the nightclub. “These killers are not normal people. They are under the influence of some strange powers.”

Prior to the Williamsfield massacre and after the killing of Campbell, there were two other murders, one in Alma district, Grange Hill, and the other in Bethel Town, which is fast becoming one of the most dangerous communities in Westmoreland.

In the incident in Alma, which occurred about 4 p.m, Monday, 20-year-old Patrick Campbell of George’s Plain district was confronted by two armed men, who, after a brief argument, shot him multiple times. He died on the spot.

Three hours after Campbell was killed, the calm in Bethel Town was shattered by a hail of bullets. At approximately 7 p.m, residents reportedly heard several loud explosions. When the shooting subsided, they found 25-year old Adjari Romans, who is of a Cedar Valley Farm address, lying in a pool of blood along the roadway.

With the news of Monday’s six murders spreading like wildfire across the parish, the terror continued yesterday morning. Shortly after 8:15 a.m., residents of Llandilo alerted the police to gunfire in their community. When the police went to the location, they found a man, who was identified only as ‘Chucky’, suffering from multiple bullet wounds.

Renaldo Campbell, the eighth victim of the 18 hours of horror, was reportedly walking along Lewis Street in Savanna-la-Mar, when he was pounced upon by assailants, who shot and killed him.

Assistant Commissioner of Police Donovan Graham, who heads the police’s Area One region, which includes Westmoreland, said additional resources have been brought into the parish as the police intend to go all out to apprehend those responsible for the spate of murders.

“We are strategising and compiling our intelligence for us to carry out the necessary operational response,” said Graham, who was on the ground in Westmoreland to provide support to the cops. “I want to assure the residents of Westmoreland – and the country in general – that we have received additional resources in the parish and we intend to seek those who have caused the mayhem yesterday, and into this morning, as well as those others who have continued to bring violence to this division.”

Westmoreland, which was the most murderous of the western parishes with 141 murders last year, has recorded 21 since the start of this year.