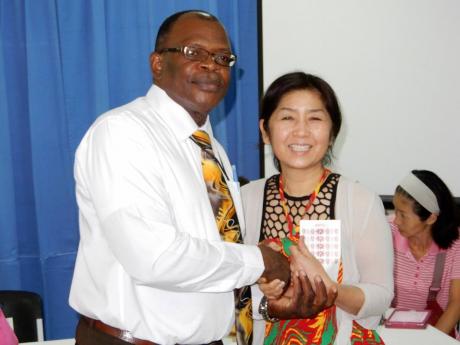 Andre Wright
In this last Gleaner photo of Leo Garel, taken on February 5 at the hospital, Garel is seen here saying thanks to Kiyoko Suenaga after she and 17 other Japanese business executives had made donations to the hospital and the Cancer Society.

Sometime after six o’clock, Garel was found at home on the floor, unresponsive, and despite emergency attention by medical personnel, who rushed to his home in Greenwich Acres in St Ann and later at the hospital, he passed away.

A team of counsellors drawn from the Jamaica Constabulary Force (JCF) and the North East Regional Health Authority’s own personnel were deployed at the hospital to comfort grieving workers.

“At this time, we are receiving counselling assistance from the JCF (Jamaica Constabulary Force) and the mental-health team from the North East Region,” Marcia Lafayette, director of nursing services at the hospital, told The Gleaner yesterday. “Our regional director helped to organise that because the staff really, really not dealing with the sudden passing of our CEO.”

In his role at the St Ann’s Bay Regional Hospital, first as personnel manager and then as CEO, Garel earned the respect of his colleagues and was credited as a people person.

“Mr Garel was a compassionate, caring CEO. Very compassionate, very caring,” said Lafayette, who has worked at the hospital for more than 30 years, many of them alongside her former boss. “It is a sad day, a very, very sad day in the North East Region, and specifically with St Ann’s Bay Hospital.”

Chairman of the hospital board Michael Belnavis described Garel’s death as “untimely and really tragic”.

“Since becoming chairman, we’ve worked closely to transform the physical appearance of the hospital,” he said. “When we decided to put certain things into place at the hospital, he stepped up to the plate and was a person who was always available. Even if you were to call him at midnight, you would get him. He was a person who took care of his staff.”

Diane Pollard, president and CEO of the Issa Trust Foundation, which has donated millions of dollars worth of equipment to the hospital over the years, told The Gleaner that her organisation was “devastated”.

“Mr Garel was an outstanding partner in the development and continued improvements at the St Ann’s Bay Hospital. We send our prayers and thoughts to Mr Garel’s family.”

Dr Roosevelt Crooks, who grew up with Garel in St Ann, was devastated by the loss.

“I knew him from childhood. We sat in the same bench from primary school, St Ann’s Bay Primary. We passed exam the same time – he went to Ferncourt, I went to York Castle,” Crooks said.

He added: “He was an awesome person. He was a really hard worker, and I think he wanted to give back to his community, and that’s why he worked so hard. Did he take time out for himself? Maybe not. But it’s regrettable because he has offered a lot to the healthcare industry, and he will be sadly missed.”