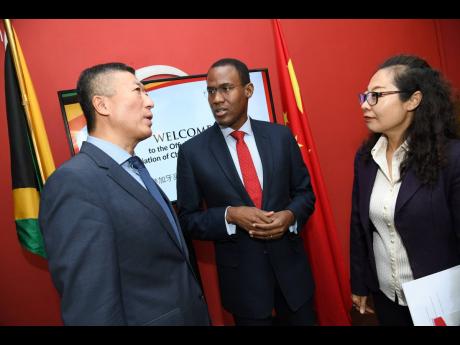 Rudolph Brown/Photographer
Minister of Finance Dr Nigel Clarke (centre) chats with Dr Hu Zhimin (right), president of the Association of Chinese Enterprises in Jamaica, and Chinese Ambassador Tian Qi at the official launch of the association at the Spanish Court Hotel in New Kingston on Tuesday.

Chinese businesses are more than welcome to operate and invest in Jamaica as the country stands to gain from the transfer of technology and the wealth of their businesses, which is likely to further sustain Jamaica’s own economic turnaround, says Finance and Planning Minister Dr Nigel Clarke.

He was echoing sentiments similar to Chinese Ambassador Tian Qi, who said that Chinese businesses that invest in Jamaica also add value by sharing technological advances and knowledge with locals.

They both spoke at Tuesday’s launch of the 16-member Association of Chinese Enterprises in Jamaica at the Spanish Court Hotel in New Kingston.

Clarke mentioned Jamaica’s success in bringing down the interest rate, a stable exchange rate, high job numbers, and the relative strength of the economy as reasons more Chinese enterprises should set up operations here.

“It is in that context that I say foreign direct investment (FDI) from Chinese companies is welcomed to Jamaica. We want those investments to be in win-win ... , where investors win, customers win, employees win, the Jamaican people win, and the Jamaican economy wins,” Clarke said.

He added, however, that Chinese investment, with an investment portfolio amounting to US$3 billion, must be characterised by competitiveness to drive greater deals for consumers and stakeholders alike.

“We want FDI [flowing] in Jamaica from Chinese enterprises, from all enterprises, to facilitate the greatest domestic value-added possible. I want to encourage the Chinese enterprises operating here to consider that in their investment, whether opportunity exists to incorporate domestic content in the production of the service or the goods that you’re offering in Jamaica, we want you to be encouraged to include that domestic content,” the minister noted.

He said that what is most important to Jamaica is for goods and services that emanate from Chinese investment help the local economy to flourish and thrive and prosper.

“We want to make sure that Chinese investment is accompanied by the requisite levels of training and skills development among the Jamaican people,” said Clarke, citing JISCO Alpart for having invested heavily in Jamaica’s human capital by providing the opportunity for 40 engineers currently in China undergoing training.