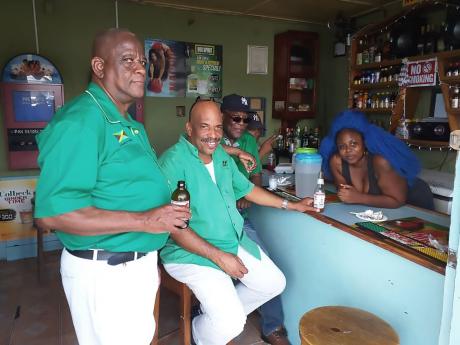 Sales have boomed at supermarkets, corner shops, and rum bars as activists and party workers from both sides of the political divide set up shop in East Portland.

The influx of political personalities and party supporters to the East Portland constituency has come in anticipation of a by-election, which Prime Minister Andrew Holness on Friday night revealed will take place March 25. Nomination day has been set for March 8, International Women’s Day.

While Jamaica Labour Party (JLP) supporters remained quiet and were barely visible ahead of the February 23 burial of the late Member of Parliament (MP) for the constituency Lynvale Bloomfield, supporters of Bloomfield’s People’s National Party (PNP) were busy staging a number of wakes and private gatherings.

But since the burial of Bloomfield, who was found murdered at his Passley Gardens home on February 2, the JLP has been securing private dwellings to house party workers, activists, and those holding public/political office.

“My bar full every day with Labourite,” said one bartender, who gave her name only as ‘Likkle Miss’.

“Dem spend real dollars and mi happy fi di increase in sales and fi mi boss just a count money so. Mi reason wid dem every day and mi welcome anybody as long as dem a spend money and nah just chat. It good fi di town, ’cause nutting nah gwaan and, wid this election, everybody can see say money a spend all ’bout.”

‘Likkle Miss’ was speaking with The Sunday Gleaner on Friday, hours before Holness’ announcement of the by-election date in Port Antonio Square.

In the meantime, with more people expected to flood East Portland in the coming days – and with a PNP mass meeting scheduled for today in Port Antonio – bars, supermarkets, corner shops, and markets are relishing a financial windfall which, according to many, is well needed, especially in East Portland.