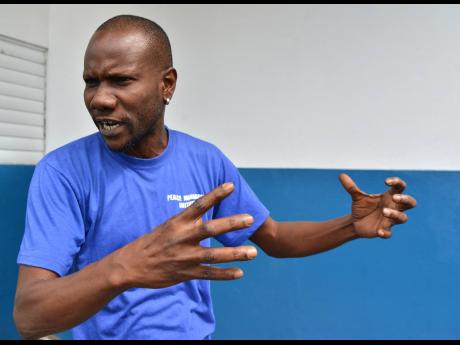 Kenyon Hemans
Marlon Gordon, resident of Jones Town, has been helping youth in the inner city to resolve conflicts peacefully.

Committed to steering youths from the path he once trod, violence interrupter Marlon Gordon has been actively persuading at-risk teenagers in west Kingston to live crime free.

Gordon said he used to be involved in criminal activities, but the 42-year-old has put that life behind him and is now an advocate for peace in south St Andrew communities of Jones Town, ‘Top Jungle’ and ‘Havana’. The latter are communities in Arnett Gardens. He credits his transformation to the Peace Management Initiative (PMI).

“It didn’t take me overnight to change; they had to really dig deep and talk to me and then I see the focus,” he said.

He said that while he started interacting with individuals from the group in 2002, it wasn’t until 2013 that he really got involved. Between 2015 and 2016, he underwent training in mediation and other areas needed to defuse conflict.

“Me a try stop fire and me a try save lives,” he said.

Just a few minutes before talking to The Sunday Gleaner, Gordon had to intervene in a domestic dispute between two females.

“It’s mostly domestic conflicts happen where I live. Woman a fight over man, yard problem like over broom,” said the Jones Town resident.

But that is not the case generally, as just two weeks ago, he was forced into mediation mode after a flare-up of gun violence in Havana. He spoke to residents in warring sections of the community to see what it would take to stop the feud from escalating.

“We tell them that they can come up with a plan, what they want to do, because they said they don’t have anything to do,” he said.

The group initially wanted to host a fish fry, but that plan was downsized and a cake sale was held instead.

“At least the shot stop fire for two weeks now. From the time we intercept it, no shot no fire,” he said.

“Them (residents) want the peace. I see it in them. Some of them, they are not doing it off their own, so you have to get into their minds,” he added.

KNOWING WHEN TO INTERVENE

The father of two daughters said he is extremely focused on at-risk youths who are 16 years old and above and are already showing signs of entering a life of crime.

“You don’t have to directly shoot anybody yet, but from we see that you are going down that road, we try to intercept you, interrupt you and try to engage with you, teach you the right way, get you to meet some social worker in PMI,” he explained.

Morgan, who just recently completed a two-day course in psychology and first aid, gave up his job as a selector to focus fully on helping to transform lives.

“Most times, police don’t see nothing going on, but we just a keep things on a level,” he said.

Gordon finds that illiteracy among youths is one of the issues that result in feelings of hopelessness. He has been doing what he can to get them assistance to go back to school or get a job.

The Violence Interrupters programme is organised by the PMI and funded by the Citizen Security and Justice Programme in 20 communities in the Corporate Area, St Catherine, and Clarendon.