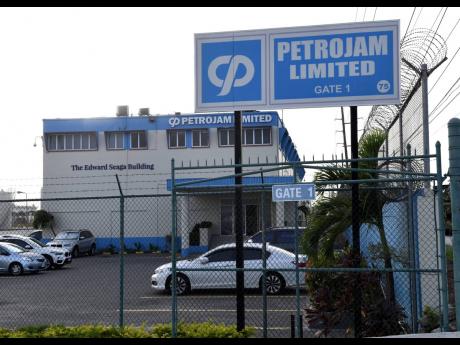 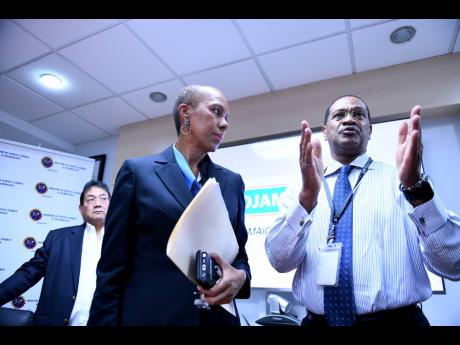 Ricardo Makyn
Minister of Science, Energy and Technology Fayval Williams listens keenly to general manager of Petrojam, Winston Watson, at a press conference held at the oil refinery’s boardroom on Monday. In the background is Paul Hoo, chairman of the Petrojam board.
1
2

As investigators continue their drive to clamp down on the illicit petrol operations, the Jamaica Defence Force (JDF) is reporting that it has found no illegal connection to Petrojam’s 23 underwater pipelines.

This was revealed by Energy Minister Fayval Williams yesterday while speaking at a press conference held at the oil refinery’s headquarters on Marcus Garvey Drive in Kingston.

This comes after suspicions were raised that oil was possibly being siphoned off from the state-owned oil refinery, prompting investigations into the matter.

$5.2 billion worth of oil missing

Holness’ announcement came in the wake of reports by Auditor General Pamela Monroe Ellis that in five years, Petrojam has not been able to account for 600,684 barrels of oil worth $5.2 billion.

“The operation was conducted with approximately 14 divers and took place on a daily basis, because the Kingston Harbour is not the most simple place to dive and we needed to ensure that we did a comprehensive job.

“So all the pipelines were surveyed visually and by hand when divers basically felt along the pipeline to detect any anomaly, any attachments that would have been there,” Prescott said.

The Counter-Terrorism and Organised Crime investigation branch of the Jamaica Constabulary Force on Friday arrested and charged a 76-year-old woman in Greenwich Town, Kingston 11 for breaches of the Petroleum Act.

The unidentified woman was reportedly caught with fourteen 45-gallon drums of petroleum, one gas pump, and 12 empty drums.