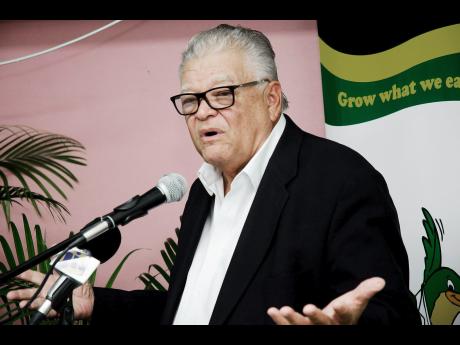 The Andrew Holness administration has committed $1 billion for a “revolutionary” initiative, first announced during the last annual conference of the governing Jamaica Labour Party (JLP), that will target unattached young people, tenements or so-called big yards, as well as provide improved living conditions for indigents.

The allocation is included in the 2019-2020 Estimates of Expenditure for the Ministry of Economic Growth and Job Creation (MEGJC).

Karl Samuda, the minister without portfolio in the MEGJC, said Holness, the prime minister, would announce details about the project during his Budget presentation, but suggested that it was unlike anything undertaken by successive governments.

“I have met with the project leader and I am satisfied that it is absolutely one of the most revolutionary social programmes by any government,” Samuda said yesterday as the Standing Finance Committee of Parliament combed through the Estimates of Expenditure for the upcoming fiscal year, which begins on April 1.

He said under the project, which is a part of the Housing Opportunity Production and Employment (HOPE) programme, “disengaged” young people in “each community throughout the country” will have a chance to acquire a skill through training and predicted that the benefits to the rest of the nation would be far-reaching.

“Every member here [Parliament] is entitled to request that children in their constituency be recruited and trained to have an attitudinal change and a new approach to elevating themselves from their present state,” Samuda said.

“It offers that youth to participate in improving the lives of the indigent in inner-city and deep rural areas,” he added.

According to Samuda, the budgetary allocation will help to expand the training aspect of the project and assist the indigent in the repair and maintenance of the conditions under which they have to live.

“There was no renewal of a partnership or MOU with Food For the Poor. We will be doing it individually, in each constituency where we will seek to get houses built, units built that will accommodate the relief to people who are living under adverse conditions while at the same time training the youths who will be doing the work,” he explained.

Holness, in his address to the JLP Annual Conference last November, revealed that his administration was crafting a project through which $500 million would be spent to build “reasonable” housing solutions for the poor and indigent across the island.

He indicated that as part of the plan, young people would be recruited into the HOPE programme.

“We are going to put them through a process of training from HEART Trust/NTA and other training institutions and we are going to use them in an apprenticeship modality to construct those homes for the poor and indigent,” the prime minister said then.