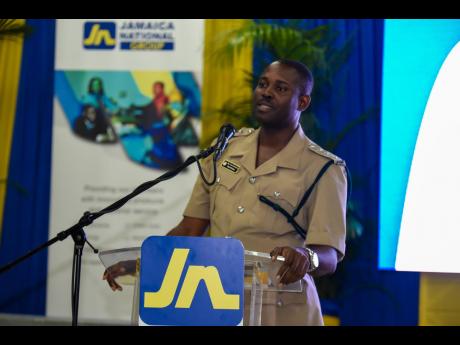 TRESCOTT MYERS
Deputy superintendent in charge of crime for Westmoreland, Carlos Russell, speaking during a Safety and Security Forum late last week at the Wesleyan Holiness church hall in Savanna-la-Mar.

Westmoreland’s porous borders are making the parish especially vulnerable to crime but the police do not have the capacity to rein in smugglers, says Deputy Superintendent of Police (DSP) Carlos Russell.

Addressing members of The Jamaica National (JN) Group and residents during a Safety and Security Forum in Savanna-la-Mar late last week, Russell said the western parish is easy pickings for the flow of illegal guns. His concerns came even as the town faced a curfew because of a spate of 10 murders in three days.

“If you look at Westmoreland, we are bordered by the Caribbean Sea, and we don’t have much in terms of security at these borders,” he said.

“Every single young man in this community has access to a firearm,” the DSP bemoaned.

Speaking shortly after the end of the forum, the DSP Russell added that although there are marine-police checkpoints in Bluefields and Negril in the parish, the boats the police use cannot venture into certain areas, as they are not as quick as the go-fast boats operated by smugglers.

He related that although the police receive support from the Jamaica Defence Force Coast Guard to police the parish’s shores, the illegal arms and drugs trade with Haiti and other countries continues to thrive.

“We have had limited success as it relates to intercepting,” he acknowledged, noting that since he took up the post in November 2017, no guns have been retrieved along the coast.

The DSP said the guns have been supporting another major contributor to violence in the parish, the lottery scam, which gangs have been using to finance their operations.

Russell says the violence currently gripping Westmoreland is not unique to the capital, Savanna-la-Mar, but has found its way into once-peaceful small communities.

“You look at communities like Williamsfield, which is normally very quiet, and you see it rocked with three murders in the space of one night,” he said, making reference to last week’s triple murder.

Pointing to the resource limitations of law enforcers, he called for citizens to support the police by being vigilant. The deputy superintendent said, for example, that residents needed to become more active in neighbourhood watch groups, noting that there are few such associations in Westmoreland.

He also urged residents to be observant by knowing their neighbours and reporting suspicious occurrences to the police.

“It is important that you get the telephone numbers of your local police, because when you call 119, they will have to reroute the call to the station, and that lapse in time, sometimes, can be very detrimental,” he added.

He concluded by pleading with residents not to support lottery scammers and criminal gangs.

“When things are good and these persons are making money, then everybody is happy and support them. They don’t see anything wrong with it. But as night turns to day, these persons will always get involved in criminal activities,” he said.

The JN Group’s series of Safety and Security fora are organised to engage its members and other residents on national security and related concerns. The next forum is scheduled to be held in Mandeville, Manchester, on March 21.