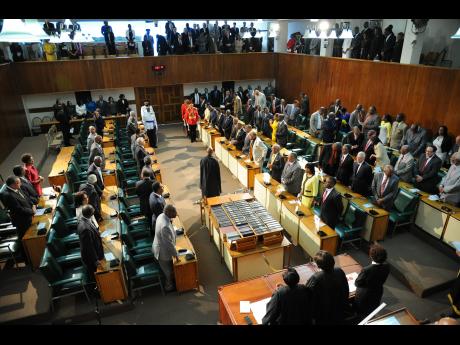 File
Members of parliament and senators are required to file their annual declarations.

Over three calendar years, starting in 2014, 16 current and former lawmakers from the two main political parties were reported to the nation’s top prosecutor for failing to declare income, assets and liabilities within the required time, reports from the chief corruption watchdog have revealed.

According to the documents, obtained by The Gleaner, former members of parliament (MPs) as well as senators were reported to the director of public prosecutions (DPP) from 2014 to 2016 for ignoring the Integrity Commission’s request for additional information to guide its perusal of their statutory declarations.

The revelations were included in three reports that were prepared by the commission for the calendar years 2014, 2015 and 2016 and quietly tabled in the House of Representatives. This comes more than a month after the anti-corruption lobby National Integrity Action raised concerns that no annual reports detailing the statutory declarations of parliamentarians were tabled in the House of Representatives for the years 2014 to 2017, as required by law.

The reports paint a dismal picture of parliamentarians and senators routinely ignoring their obligations as outlined in the Integrity Act, which requires them to file annual statutory declarations by March 31 of the following year and provide explanations where requested by the commission.

As an example, the Integrity Commission, in its 2015 report, revealed that Ernest Smith, former Jamaica Labour Party (JLP) MP for St Ann South West and attorney-at-law, was reported to the DPP “on more than one occasion” because his declaration at the time was “outstanding since December 8, 2012.”

“The commission again records its concern at the high incidence of incomplete declarations being presented, resulting in several letters and queries having to be sent out. It is hoped that in the very near future, declarations presented are properly prepared and adequately supported,” the commission complained from as far back as 2014.

Several attempts to get a comment from Smith yesterday were unsuccessful.

Among those reported to the DPP for “necessary action” over the three-year period are former energy minister Clive Mullings, former PNP junior ministers Arnaldo Brown and Sharon Ffolkes-Abrahams, as well as former JLP Senator Arthur Williams.

Efforts to get an update from Director of Public Prosecutions Paula Llewellyn yesterday on the cases referred to her office were unsuccessful, as calls to her cell phone went unanswered.

According to the reports, 31 MPs and senators were reported to their respective party leaders in 2014 for filing declarations after the deadline. Thirty were reported the following year, and 31 for the 2016 calendar year, the documents revealed.

The documents showed, too, that five declarations for the 2013 calendar year, including that of then Opposition Leader Andrew Holness, “were not cleared due to inadequate responses to queries”. The others are former PNP MPs Paul Buchanan, Richard Parchment and Jolyan Silvera as well as Senator Noel Sloley.

Holness was also late in filing his submission in 2015, though the commission noted in the 2016 report that he had requested additional time.

In the 2014 and 2015 calendar years, nine declarations, including those submitted by current government ministers, Delroy Chuck and Daryl Vaz, were not cleared for the same reason.