JMEA vows to ‘fight to the death’ against sugary drinks tax 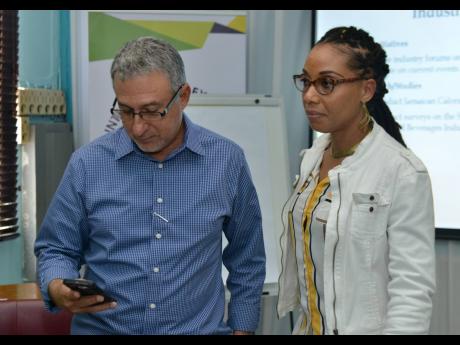 Kenyon Hemans
Metry Seaga, president of the Jamaica Manufacturers and Exporters’ Association (JMEA), speaking with Imega Breese McNab, executive director of the JMEA, at the food and beverage industry meeting in Kingston on Tuesday.

The Ministry of Health is on a collision course with players in the food and beverage industry who have vowed to “fight to the death”’ against what they termed the wide-scale and sustained misinformation behind the Government’s campaign to get public support for its proposed tax on sugary drinks.

“If we allow some of the rhetoric that’s going around to become commonplace, if we allow the Government to make decisions that are uninformed, we are going to end up on the back foot and we are going to end up, as an industry, being hurt. That is not what we want,” Jamaica Manufacturers and Exporters’ Association (JMEA) President Metry Seaga said at a meeting on Tuesday to update members of the private sector on the implications of new regulations for products with salt, sugar, and fats.

“We want to make sure that we head off any problems at the pass before they even occur,” Seaga stressed.

He emphasised the importance of the food and beverage industry to the economy.

“I think it is very important to know that in 2018, the beverage industry contributed over 6.1 per cent, or over US$111 million, to the domestic export, and food contributed 11.7 per cent, or over US$214 million. Those are not small numbers, ladies and gentlemen. They are good numbers, and the Government needs them and needs that revenue, and we need to bear that in mind when we re deliberating these topics.

“The gross valued added at current prices for the food, beverage, and tobacco industry in 2017 was ... nearly $90 million. An analysis of the preliminary general consumption tax (GCT) revealed that the sales in the food, beverages, and tobacco industry grew by 3.4 per cent to $45 billion,” Seaga continued as he rallied manufacturers, producers, and distributors to prepare for battle.

“We must act now. We must make our voices heard. The JMEA is ready, is willing and able to fight for you, fight with you. You must be ready for the fight as well,” Seaga told business owners and operators.

He urged his colleagues to supply the relevant data to inform a unified strategy in going forward.

“We can’t have some players pulling in one direction, others in another, and the JMEA going elsewhere. We all have to be on the same page and ensure that our strategy is the right one and that we are committed to it.

“If we get these things from you today, we’ll fight for you. We’ll fight to the death for you. We need to work together on this one. We have forces coming at us from many different directions. I would like to make sure that we keep the jobs here, that we keep the exports going, and to keep this industry alive and vibrant,” Seaga added.

The Government has been looking at imposing a tax on sugary drinks in its fight against non-communicable diseases, including diabetes and obesity.

Last week, Minister of Health Dr Christopher Tufton told The Gleaner that even though the Government had not settled on sugar taxation as policy, there was compelling evidence that fiscal measures changed consumption trends.

“As it relates to behaviour and behavioural changes, there is no disputing the fact that legislation and regulating, including fiscal policy, does have the capacity to influence behaviour,” he said.