A matter of the heart - Kemoy Campbell’s date with destiny 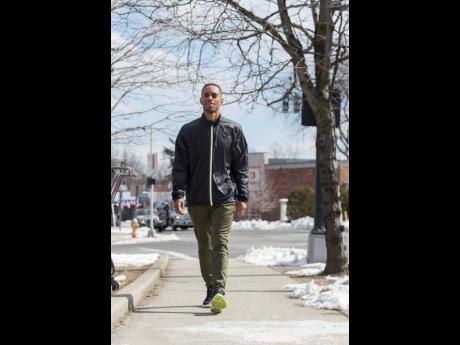 Gladstone Taylor/Multimedia Photo Editor
Olympian Kemoy Campbell, the national record holder in the 3000m, 5000m and 10000m, out for a walk following an interview with The Gleaner at the Radision Hotel in New Rochelle, New York, yesterday. It has been month since the distance runner collapsed while pacing for the 3000m event at the Millrose Games at the Armory in New York.

February 9, 2019, started like any other day for the 28-year-old Jamaican athlete. However, at close to 5 p.m., Campbell collapsed while setting the pace in the men’s 3,000m at the Millrose Games in New York City.

In an exclusive interview with The Gleaner yesterday, Campbell described the days that followed as a cocktail of emotions, ranging from fear to gratitude. His gratefulness at being among the two per cent of persons who come out of his situation alive and fully functional was matched only by the agony of regaining consciousness two days later – inside the New York Presbyterian/Columbia University Hospital – to the grim faces of his girlfriend Rachel, brothers Rashiek and Shaqoniel, as well as his father, Ronaldo.

Campbell, who is now slowly recovering from the ordeal in New Rochelle, New York, where he has had to relocate to from Virginia in order to fulfil his recovery programme, has an implanted cardioverter defibrillator (ICD) installed to the left of his ribs. An ICD is able to perform cardioversion, defibrillation, and pacing of the heart and is capable of correcting most life-threatening problems with the rate or rhythm of the heartbeat.

The former Bellefield High School and University of Arkansas star has been told to take it easy for at least another six months, at which point, his doctors will determine whether he can return to competitive running.

Looking to the marathon

Despite admitting to fears for his own life and the impact such a decision would have on his family, not only is Campbell determined to compete again, he has, remarkably, set his heart on stepping up from the 3,000m and 5,000m to the marathon.

“The doctors have told me to take the rest that I need, and after I go back for a check-up, they will tell me if I can start doing it (running) slowly again and building back up to it. They haven’t really given me any straight answers as to ‘Yes, you can do this’, but I still have a lot to offer, so I am just holding out, resting the best I can, doing my walks and simple exercises, and I will get back as soon as they tell me I can – if they tell me I can,” Campbell said.

“I have not given up [on] that chance to compete again. I was thinking of moving up to the marathon a year down the road. I think the marathon will be the ultimate event for me, and if I end up running again, I think I would go straight to the marathon,” he declared.

Several studies have shown that it is quite safe for athletes with ICDs to compete in non-contact sports, and although that is Campbell’s ultimate dream, he did admit that there is some degree of doubt that he would, in fact, make that decision if he gets the green light from his doctors.

“They (family) are scared for me to go back and run, but at the same time, it is my livelihood. I love running. I have been running for as long as I can remember, but I don’t know if I can do it again. My family means a lot to me, and if they think it’s going to put them through a situation where they are going to have to go through this heartache and pain again, then I don’t know if I can run again because I don’t want to see them the same way I saw them in the hospital again,” Campbell said while sharing his reactions to being told about his collapse.

“When I woke up, I was scared. I didn’t have any memory of what happened. After I heard what happened, there were so many emotions. I was happy to be alive but sad at the same time that my family members were put through all of that,” said Campbell, who still can’t remember the moments leading up to his collapse besides a random conversation with a friend on his way to the track that day.

“The doctors here told me that only two per cent of people, who this happens to, regain consciousness with full brain function. When they told me that, I was obviously surprised. Someone was definitely watching out for me. Otherwise, I wouldn’t be here today.”

February 9, 2019, threatened to be his last lap, but while his race continues, Campbell must soon decide where the next steps will take him.

For now, he spends his days resting, doing light exercises, and walking a mile to keep fit. In more ways than one, it’s a matter of the heart, but he knows he has a big decision to make in the months to come.