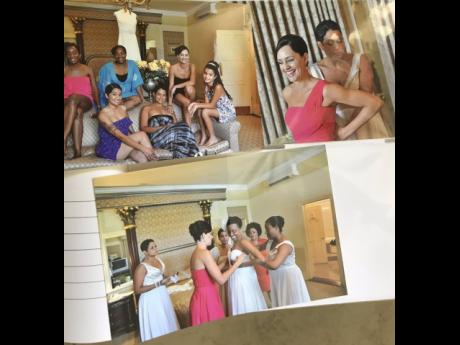 Contributed
Snapshots of Ann-Marie Vaz. I photo at bottom, Ann-Marie Vaz (centre) helps her sister, Trisha Thompson, get dressed on her wedding day.

Trisha Thompson, sister of Ann-Marie Vaz, prospective Jamaica Labour Party (JLP) candidate for the East Portland by-election, has pushed back against comments of classism and racism, saying that the “typical Jamaican family” had humble beginnings.

“I use that word to say ‘typical’ on the basis where family that is considered a broken home where their parents aren’t necessarily married. So while our grandma, she was married and she had her children, ... not all of her children got married, which included our beloved mother,” Thompson told The Gleaner yesterday, adding that the she and Ann-Marie had different fathers.

The two grew up with their grandmother, mother, and other relatives in a family house located in the Duff House district on the border of St Elizabeth and Manchester.

“At some point, she used to spend a night or two with our relatives in Dunder Hill because of the walking … . What she had to do, you know, she had to walk all the way from Duff House to a place called Bull Savannah to get the Hampton bus,” Thompson recounted.

After leaving Hampton, Vaz attended Alpha Academy and Excelsior Community College before going on to The University of the West Indies, Mona, to further her studies.

Vaz, who will turn 53 on March 13, was also an Air Jamaica flight attendant before she joined the business of her former husband, Christopher Wood, as the marketing manager. The 10-year union produced two children.

Thompson, who is nine years younger than Vaz, said that her sister played an instrumental role in her education up to the tertiary level.

“She actually sent me to school,” Thompson said.

Vaz has been married to West Portland Member of Parliament Daryl Vaz for the past 16 years. Although the couple has one child together, Thompson said that her sister also considers the two children her husband had previously as her own.