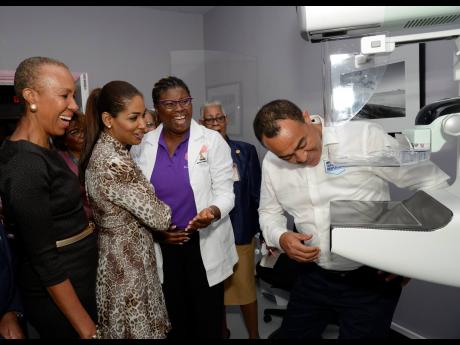 Ian Allen
Dr Christoper Tufton (right), minister of health, playfully tries to put his chest under the 3D imaging mammograph in the Women’s Imaging Centre at the UHWI yesterday to the amusement of (from left) Fayval Williams, technology minister; Lisa Hanna, member of parliament for South East St Ann, who represented the leader of the Opposition; Dr Derria Cornwall, head of the Women’s Imaging Centre; and Janet Coore-Farr, former president of the Nurses Association of Jamaica (NAJ).

Jamaican women are being advised that spending less than $20,000 annually for breast-cancer screening and the chance of early detection is likely to save their lives and millions of dollars in expenses.

At the same time, women, particularly those over 40 years old, are being cautioned against waiting on physically obvious signs to get tested for breast cancer.

The assertions by respected radiologist at The University Hospital of the West Indies, Dr Derria Cornwall, were made yesterday during the official opening of the Women’s Imaging Centre at the hospital.

“A name-brand shoes can cost $15,000-$20,000, and teenagers are wearing these to school, so it’s a matter of perspective. That shoes money is the same amount to screen your breasts and possibly diagnose the cancer early, saving you the millions that you will need but can’t find to treat a late-stage cancer,” explained Cornwall, who heads the centre, which is outfitted with a state-of-the-art 3D mammography unit.

The first of its kind in the public-health sector, 3D mammography offers a clearer picture of invasive breast cancers and reduces the rate of false positives.

“We need women to be more situationally aware that two of the biggest risk factors for getting breast cancer are being a woman and getting older. Most of the women who have breast cancer are not from any cancer family,” said Cornwall.

“It’s only about 15 per cent of women have genetic predisposition for breast cancer. So, we need women to stop thinking, ‘If my family only have sugar and pressure, I have nothing at all, I don’t need to screen.’ Being a woman and getting older are all you need to be a candidate for breast cancer.”

Further lamenting that only a measly 7.1 per cent of cancer cases locally are diagnosed during its earliest stages, Cornwall also sought to debunk the age-old myth that screening causes breast cancer.

“This rate is from the 1990s, so we have a lot of work to do to get out of single digit. One of the major barriers to screening is the myth that the machine produces radiation, which causes cancer, and that’s not true,” Cornwall said.

“The radiation dose from doing your mammogram is very low and will not cause a cancer, so we are encouraging our women, the gatekeepers of our families, to come in and get tested. It’s a matter of life and death.”