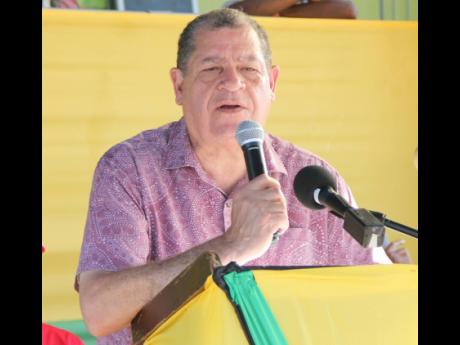 The police unit established to rein in farm theft will have to be overhauled because of its failure to put a dent in praedial larceny, Agriculture Minister Audley Shaw said.

Shaw lamented the state of penury in which hard-working farmers were left after being repeatedly targeted.

“It’s a disgrace, and we need to come together. The Government must lead the way,” said the minister, while addressing farmers at the 64th staging of The Hague Agriculture Show in Trelawny on Ash Wednesday.

According to Shaw, the Praedial Larceny Prevention Coordination Unit, which was commissioned in March 2015, and which operates between the Ministry of Industry, Commerce, Agriculture, and Fisheries and the National Security Ministry, is dormant because of a lack of workable resources.

“I am going to review the present praedial larceny unit that exists at my ministry,” said Shaw, responding to concerns raised by Falmouth Mayor Collen Gager about the ineffectiveness of the anti-theft task force. “It needs beefing up, it needs more resources, and I am going to ensure that we put more resources.”

The Praedial Larceny Prevention Coordination Unit, which had an enforcement team of police officers from the Jamaica Constabulary Force, was given the responsibility to curtail the theft of agricultural produce across the island.

“My heart goes out to our farmers when they produce these animals, raise the goats and cattle, plant their [crops], and then somebody comes in the dead of night to reap it before you can reap it for yourself to take care of your families,” said the agriculture minister.

Gager, who spoke before Shaw at the event, questioned the viability of the praedial larceny unit as a buffer between farmers and thieves, who steal an estimated $6 billion in crops and livestock annually. Farmers have, too often, been left empty-handed despite efforts to insulate themselves from thieves, said Gager, who chairs the Trelawny Municipal Corporation.

“What has happened to the praedial larceny prevention unit, which at one point was very active and effective in the parish of Trelawny?” asked Gager.

“Our farmers deserve to enjoy the benefit of the fruits of their labour. As a farmer myself, I am very much concerned about the level of theft that our farmers grapple with. Having toiled and laboured so hard, unscrupulous men and women come like thieves in the night and steal from our crops and livestock,” he added.

“I want to use this medium to call for the active enforcement of the Praedial Larceny Prevention Act to ensure that the livelihood of farmers is safeguarded. I am also encouraging our farmers to be vigilant, to be wise, and also to exercise climate-smart farming practices to minimise losses, man-made or otherwise, Gager said.