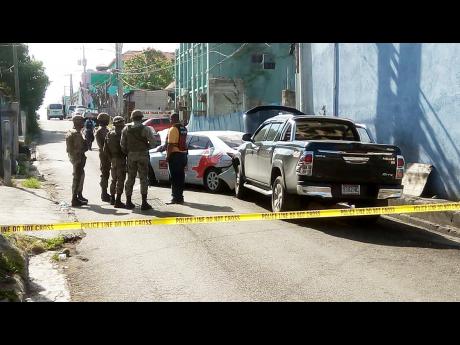 A policeman consults with soldiers at the crime scene in downtown Montego Bay yesterday. Photo by Hopeton Bucknor

The Government and security forces have come under fire from two leading business lobbies as the resort city of Montego Bay has been hit by a wave of shootings and killings that have rattled tourism and other commercial interests.

The Montego Bay Chamber of Industry and Commerce and the Jamaica Hotel and Tourist Association called on the authorities to rein in the bloodletting, with five killed yesterday among 28 fatalities this year.

Their concern comes amid fears that the removal of a state of emergency, which slashed homicides in St James by 70 per cent in 2018, would embolden gangsters to re-emerge and cause mayhem.

“Despite the assurances and reassurances from the Government of Jamaica and the joint security forces that every effort will be made to ensure that the gains of the ESM will continue post ESM, the rising trend of brazen, cold-hearted shootings and killings within the parish gives great concern,” a press statement issued yesterday said.

Both organisations called on the Government to “hasten the implementation of the relevant polices, legislation and strategies to bring an instant halt of this undesirable trend,” alluding to the Enhanced Security Measures legislation the Holness administration has telegraphed as one of its post-emergency tools to suppress violent crime.

Yesterday in downtown Montego Bay, the driver of a courier vehicle and a security guard were killed when heavily armed gunmen staged a daring daylight robbery, during which they stole an undetermined sum of money believed to be between J$10 million and J$20 million.

The driver, who was transporting the cash as part of a routine Sunday morning pick-up of cash from supermarkets, was identified as 48-year-old Floyd ‘Tony’ Wilson, of Rosemount Gardens, also in Montego Bay. The security guard, who was part of a two-man team from HawkEye providing escort service, was identified as Canute Earl, of Norwood, who is believed to be in his early 50s.

Eyewitnesses said four men alighted from the two vehicles with rifles and opened fire on both the courier and HawkEye vehicles simultaneously. During the barrage of gunfire, Wilson and Earl were killed and another security guard seriously injured.

During the attack, the robbers seized the money and sped off.

“Once de shot dem start fire, everybody haffe run fe cover,” said a bystander. “Yu coulda hear de car glass dem a mash up and people a run and a scream. Other cars along the road also got shot up because a nuff shot dem man dem fire.”

When The Gleaner arrived at the location, Wilson’s body was on the ground in a pool of blood. It was subsequently learned that Earl died while undergoing treatment at Cornwall Regional Hospital, while his colleague was admitted in a serious condition.

“The MID (Major Investigation Division) has been called in to investigate this incident,” said Superintendent Vernon Ellis, the commanding officer for the St. James police, who visited the location. “We are now following some strong leads, and I want to ask the business community to remain calm as we intend to hunt down and arrest the perpetrators.”

For Wilson’s family, his death was particularly traumatic, as he was reportedly in the process of preparing to take family members to the grave-digging of a relative when he was reportedly called to perform courier duties.

“We were waiting on him to return to carry us to the country when we got the news that he was killed,” a relative told The Gleaner. “We are all shaken up because we now have two dead instead of one.”

Officials of HawkEye who visited the location were distraught but deferred comment, saying the company would be releasing an official statement.

The Jarrett Street incident was just one of several violent incidents that jolted the western city yesterday, as two other persons were shot and killed and another stabbed to death.

Those killed have been identified as 30-year-old Suniel Foskin, who was shot in Farm Heights; a man from Norwood identified as ‘Hot Beer’, who was also shot; and an unidentified woman, whose body was found on a beach in downtown Montego Bay with multiple stab wounds.

The latest killings bring to 28 the number of persons killed in St James since the start of the year.