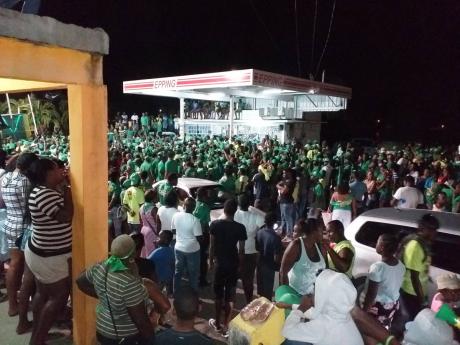 Gareth Davis Sr
A section of the massive crowd at a Jamaica Labour Party spot meeting in Manchioneal, Portland. 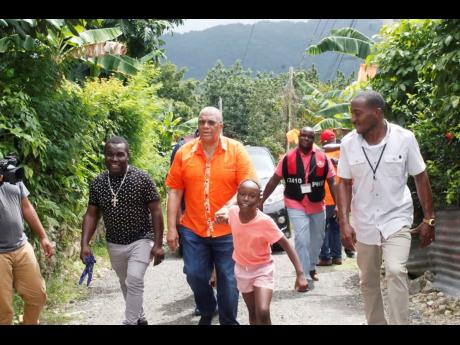 As the race to win the hearts and minds of the electorate in Portland East heats up, the ruling Jamaica Labour Party (JLP) and the People’s National Party (PNP) are pulling out all the stops to give their candidate the ascendancy in a gruelling fight to the finish that will end on April 4, by-election day in the constituency.

President of the PNP, Dr Peter Phillips, toured Portland East and met with party supporters on Sunday, while JLP heavyweights held a meeting at Manchioneal.

Sunday was arguably the busiest day for both political parties, who have now stepped up their campaigns as nomination day looms on Friday.

The PNP train started rolling at about midday on Sunday, when Phillips, along with a contingent, started a tour of the constituency in Snow Hill, where they met with dozens of party supporters clad in the party’s traditional orange. The PNP group then journeyed to the communities of Norwich, Free School (Halls Avenue), Breastworks and Prospect.

“There is great enthusiasm among the supporters and Comrades of the PNP,” commented Phillips.

“Across the constituency in Manchioneal, Fairy Hill, and Port Antonio, lots of people, who have traditionally been staying away from participation, are coming out in support of our candidate, Damion Crawford. They are prepared to come out as they see someone who is articulate and is willing to work for the people,” he added.

Crawford, who will be the PNP’s candidate, is expected to face off with the JLP’s Ann-Marie Vaz.

But while the PNP held a meeting at Prospect, Labourites transformed sections of Manchioneal into a sea of green. “Labourite river come down bank to bank,” declared chairman of the JLP, Robert Montague.

“What a crowd! Yes, this sell off. Look pon young people! This is a good sign going forward. Mi neva see nothing like this yet. East Portland gone green. Action Ann is ready and waiting to continue the work that she has already started. Sea View farm road fix already. The bridge at Bryan’s Bay along the train line fix, and the young and elderly can now walk free with ease and comfort. This is action, not a bag a mouth.”

In her speech, Ann-Marie Vaz spoke about her desire to help reshape the lives of those who have been denied opportunities to improve their living conditions, and also pledged to lead from the front.

“I know what it feels like to be hungry and having to walk miles to get to school,” said Vaz.